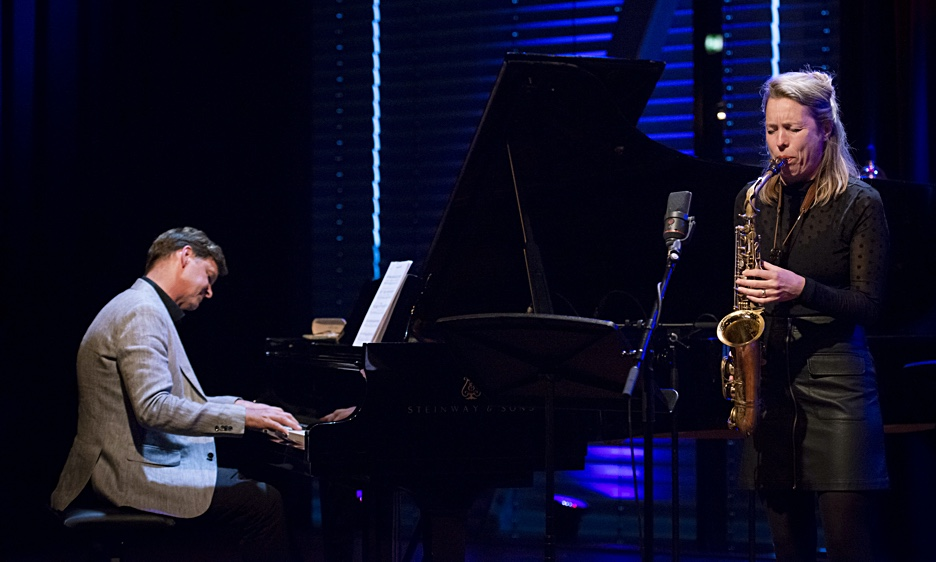 Dutch drummer and bandleader Eric Ineke's JazzXpress featured Tineke Postma on her alto saxophone for a centenary celebration of Charlie Parker's fast, virtuoso bebop. Postma studied at the Amsterdam conservatory and the whole band is based locally. The sextet was completed by Ian Cleaver trumpet, Sjoerd Dijkhuizen on tenor saxophone, Marius Beets on stand-up bass and Rob van Bavel at the piano.

Bimhuis in Amsterdam is in a cantilevered black box beside the Muziekgebouw complex high above the river Ij, a busy commercial waterway, in a city of canals and waterways. Opened by Queen Beatrix in 2005, Bimhuis continues to offer the best of jazz in Amsterdam, stretching back for almost fifty years. Bimhuis has lifted jazz in Amsterdam out of the cellars and into the concert hall. The stark Danish design of the exterior of the building is contrasted by wood floors in the bar and dining area. The auditorium was missing whole rows of seats—but Bimhuis was open, with an increasing program in October and beyond. In September, Bimhuis is presenting nine performances by local musicians, up from three in August. Each presentation comprises two separate dining and performance seatings, and is subtitled "Your getaway, at an appropriate distance."

The musical theme of the evening, Charlie Parker, was born August 29, 1920 in Kansas City and died just 34 years later in New York City. He suffered from addiction to heroin which began when a doctor prescribed morphine for pain. Audiences heard the effects of his suffering in his jagged musical freedom, and at times experienced it in his unreliability. In spite of his challenges, Parker's speed and range, attack and virtuosity stunned audiences when he first began to play and write bebop music. Charlie Parker remains a revered figure in jazz history.

JazzXpress began with "Steeplechase" written by Parker, the front line playing in unison with the trumpet muted until Cleaver's solo, when he dispensed with the mute. The solo turn passed on to Postma. The sextet went into George Gershwin's "Embraceable You" without a pause. Here, Dijkhuizen carried a long, clear solo on the tenor saxophone, always returning to that inimitable Gershwin chord structure. Next came Parker's "Quasimodo" from 1949, to finish the three-part medley. Ineke opened Irving Mill's "Goin' Nuts"—recorded by Duke Ellington's Orchestra under the pseudonym of The Jolly Jesters, in 1929—with a drum solo, and was joined by van Bavel on the piano. Then, the front line came in, again playing in unison. That set up some intricate cross-play to follow between the alto saxophone and trumpet.

Softly spoken drummer Ineke introduced "Parker's Mood," another of Parker's own compositions. Posta opened, playing against flourishing chords from van Bavel on the piano, while the rhythm section beat out the slow blues. Dijkhuizen's tenor saxophone joined them with a slow and soulful solo and van Bavel on the Steinway piano brought them together for a sharp finish to the tune. The band were reading from their music, the front line playing in unison, then breaking off into solos, while the rhythm section kept time. The piano was in support and also took a series of excellent solos running fast up the keyboard. This was a highly professional performance of Parker material, much of which appears on their recording What Kinda Bird Is This?— The Music of Charlie Parker (Challenge Records, 2020).

The JazzXpress performance was clearly not an attempt to copy Parker's playing, it was more a modern tribute, evincing respect for the work of a jazz giant. They went out with "Ah—Leu—Cha" (I'll Eat You), again by Parker. JazzXpress was a tight sextet playing their tribute to Charlie "Bird" Parker, to mark 100 years since his birth.