By Matt Marshall
October 2, 2009
Sign in to view read count 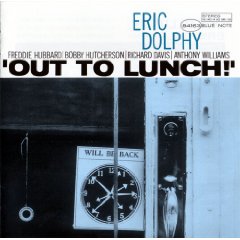 Few jazz fans still need an introduction to reed player Eric Dolphy's 1964 masterpiece, Out to Lunch!. It's an album people tend to come to fairly early on in their love affair with the music (assuming, that is, the affair started after the early 1960s), and serves as a meeting ground for a wide scope of fans, be they stalwarts of bop, avant-garde, big band, what have you. It's a modern, yet unthreatening piece of sublime music—a transcendent five-part suite in which five individual voices improvise as a single unit, as if guided by a single brain, perfectly complementing tones sounded by separate fingers, separate lips and breathing. Similar in instrumentation to Dolphy's freer, more disjointed 1963 album, Conversations (Douglas Recordings), everything clicks on Out to Lunch!. Dolphy had finally established himself as a preeminent leader, pushing his way into a fresh, vibrant meadow of modern music after spending years, both as a leader and sideman, whacking clean paths through the free-jazz brush. Four months after the Out To Lunch! session, Dolphy would be dead.

Forty five years later, Music Matters has rereleased the album as part of its 45-rpm, two-record Blue Note reissue series. Many of the other titles on the company's list are notable for their relative rarity and for currently being out of print. Out To Lunch! certainly doesn't hang its sign on that door, but may offer some fans a more palatable entry into the Music Matters' product. Its albums are of archival quality in both sound and packaging, so it's not unreasonable for a listener to seek a record he or she already knows and really wants to keep around, preserve and (let's face it) show off. This presentation of the Dolphy classic more than fits the bill. The sound is so good—so deep and dimensional—as to breathe new life into an album that many love, but haven't pulled from the CD rack in awhile. Giving this reissue a spin is almost like sitting for a private live performance.

Dolphy's alto sax and bass clarinet are full of breath: noodling through squawks, groans and growls on the Thelonious Monk ode "Hat And Beard"; harmonizing with Richard Davis' bowed bass and Freddie Hubbard's soaring, melodic trumpet on "Something Sweet, Something Tender"; blowing free and biting on the title track and "Straight Up And Down." That breath is audible itself on the lone flute vehicle, "Gazzelloni," and the palpable, airy tones mesh with the bright sparks rung from Bobby Hutcherson's vibes, while maintaining a distinct, yet real and physical, separation. And those well-chosen vibes strikes and Tony Williams' trademark bass drum shots hit the chest and stomach with full force, unsoftened by the CD's digital rub.

None of the musicians is rushed on this outing; space serves as a valuable sixth presence. The whole of the music is the thing, not individual chops. Guided by an excellent set of Dolphy originals (unlike other Dolphy albums, this one is constructed entirely of his own compositions) the record is tinged with a melancholic accent that nevertheless avoids plunging the whole into despair. A warm, even ecstatic, wallowing in memory and longing wins the day, casting the musicians into a boundary-free break of brisk, autumnal musings.

As Reid Miles' cover art suggests, the group might come back, it might not. (Or, perhaps more accurately, it has successfully blurred the line between being in and being out of tradition, of reality.) While not generally acknowledged as such, the album, and the title track specifically, sound an anthem for the generation and culture arising in the early 1960s. This Music Matters reissue proves the music is just as vital today. The brilliant sound and the necessity of flipping the vinyl, engage the listener physically, in addition to emotionally and intellectually. In every way, it's a thrilling, rewarding escape that, like the best of art, is more a going into life than away from it.


Tracks: Record 1: Hat And Beard; Something Sweet, Something Tender; Gazzelloni. Record 2: Out To Lunch; Straight Up And Down.