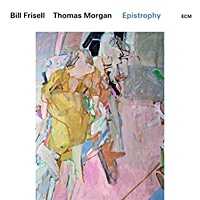 When ECM Records released Small Town in 2017, beyond capturing the profound intimacy and musical ability to "finish each other's sentences" shared by the first recorded document of guitarist Bill Frisell and bassist Thomas Morgan in a duo setting, one of the biggest walk-aways was the hope that this would not be a one-off. Two years later, Epistrophy captures another 68 minutes (running literally 34 seconds longer than Small Town) of intimate interaction, culled from the same March, 2016 run at New York City's legendary Village Vanguard club. But if certain key markers remain the same between the two releases, Epistrophy not only expands upon the shared musical understanding and ability to get deep inside whatever music Frisell and Morgan choose to play; it also possesses its own distinct narrative, largely due to a selected set of nine tunes that possess some commonalities with Small Town, but some important differences as well.

Continuing, as a brief note articulates in Epistrophy's liners, "the story begun on Small Town," where this second set of music differs is in its sources. Yes, Frisell once again selects a song played when he was a member of Paul Motian's thirty-year trio with the guitarist and saxophonist Joe Lovano. Still, in contrast to the atmospheric title track from It Should've Happened a Long Time Ago (ECM, 1985) that opened Small Town, "Mumbo Jumbo," first heard on a later trio date with the drummer, Motian in Tokyo (JMT, 1992), is a far more oblique examination of this improv-driven sketch, also composed by Motian.

Frisell—who, with this duo, continues to largely eschew the greater arsenal of effects he so often employs—brings both ring modulation and reverse attack into the mix at various points during an eight minute exploration that fluidly moves in and out of time, as Morgan effortlessly shifts from brief periods of implicit and explicit swing to timeless, open-ended passages. Throughout, the pair feeds off of one another with the same mitochondrial connection heard, not just on Small Town, but on the guitarist's celebration of film music in the context of a larger ensemble, When You Wish Upon a Star (Okeh, 2016), Morgan's first recording with the guitarist.

Small Town closes with Frisell and Morgan's remarkable look at the theme song to the 1964 James Bond film Goldfinger. Remarkable, because locating, excising and incorporating so many key elements from composer John Barry's original big band chart into the duo's more intimate look might seem impossible to believe, were there not clear evidence coming from the speakers. Frisell and Morgan bring the same rare, keenly astute ability to mine the core of any song to Epistrophy's "You Only Live Twice," which the duo first recorded in the context of a quartet on When You Wish Upon a Star (and sung by the late Charlie Haden's daughter, Petra).

Another Barry composition, but this time from the 1967 James Bond film of the same name, "You Only Live Twice" is less specifically melodramatic than "Goldfinger," but Frisell and Morgan are about as far away from melodrama as can be. Instead, their collaboration is evidence that an artist's work is, amongst other things (and far more often than not), a reflection of who they are. In this case, both Frisell and Morgan are largely introspective players, though not without idiosyncrasies and a distinctive sense of humor, two qualities that invariably emerge when called for. That said, any who've had the pleasure of seeing this duo perform live already know, as was clear during its stellar performance at the 2017 TD Ottawa Jazz Festival, that these two musicians rarely seem to need to say anything beyond the music.

Their gentle version of "You Only Live Twice" opens with the song's familiar two-chord repetition (beautifully re-harmonized, at times, by Frisell) played rubato, as the pair gradually comes together in time when the more defined introduction leads to the song's memorable theme. Imbued with a hint of melancholy, a similar bevy of arrangement lifts from the original render the duo's take as more than merely improvisational grist; instead, it's an equally reverent reading that is nevertheless defined by the pair's ability to be simultaneously expansive interpretively and most decidedly faithful.

Frisell demonstrates all kinds of techniques honed over the years, from self-accompaniment throughout, as he moves seamlessly between single notes and ever-shifting voicings, to delicately muted lines achieved, in the first verse, by resting his right hand ever so slightly on the strings of his Telecaster—one of two guitars heard on the date, with Frisell also employing a (for him) rarely used, large hollow body Gibson. Again, beyond the heavy reverb and stereo amplification that creates a rich soundscape whether he's building complex chordal passages or delicate harmonics, Frisell tastefully injects some (on this date, rarely used) tremolo during the bridge.

Frisell demonstrates, on both Epistrophy and Small Town, that he's as much a master of tastefully spare effects use as he is broad-reaching voicings (often relying on open strings to create shifting, sustaining passages) and linear phrases that run the gamut from spare melodisms to knottier angularities. For those who feel that Frisell has often deserted his jazzier proclivities and sensibilities on a multitude of other projects, ranging from a tribute to '60s music on Guitar in the Space Age! (Okeh, 2014) and his homage to John Lennon with All We Are Saying... (Savoy Jazz, 2011), to his sample-driven Hal Willner collaboration on Unspeakable (Nonesuch, 2004), his bluegrass-weighted The Willies (Nonesuch, 2002), and the horn-driven Americana of Blues Dream (Nonesuch, 2001), Epistrophy makes clear that Frisell is as strong, as influential and as ever-searching a jazz guitarist as he's ever been.

Because, as Frisell makes crystal clear with his 2018 solo guitar release for Okeh, Music IS. Like so many of his peers, Frisell is not bound to any one style of music, and while it's true that some albums may lean a little more heavily in one direction or another, at the end of the day Frisell remains an improvising guitarist, albeit one for whom the essence of any song is paramount. His overall approach to style is more inclusive than exclusive, meaning that over the years he has increasingly evolved into a stylistic melting pot capable of fitting into contexts as seemingly disparate as drummer Andrew Cyrille, trumpeter Kenny Wheeler, British singer David Sylvian and American pop/rock singer/songwriters Bonnie Raitt and Rickie Lee Jones.

Which makes Frisell as unpredictable as ever. A look at Epistrophy's track listing (which, unlike Small Town, features no Frisell or Morgan originals) reveals the traditional song, "Red River Valley," as the set's penultimate composition. History might suggest a more Americana-tilting performance from Frisell but, instead, following a more abstract rubato intro—as Frisell's initial harmonics initiate a question and answer exchange with Morgan's spare, ever-perfect choices—"Red River Valley" ultimately swings, and swings hard...hard, that is, for a duo as inward-looking, as subtle and as nuanced as this.

The inclusion of not just the idiosyncratic title track—performed, by the duo with a suitably skewed sense of dry humor—but a constantly morphing, occasionally swinging, free-bop look at the gentler "Pannonica" creates a late-in-the-set, back-to-back tribute to one of Frisell's seminal influences, pianist Thelonious Monk that's taken even further with the cover art. Also titled Epistrophy, it's a painting by the late Charles Cajori, a friend of Frisell's parents when he was growing up, and who would visit the Frisell household regularly, regaling the aspiring young guitarist with stories of seeing Monk and Miles Davis live. A grown-up Frisell reconnected with Cajori when he was studying in New York City, at which time he learned of Cajoli's painting, recounting just how important it was that ECM was able to grace the cover of this second Frisell/Morgan duo album with Cajoli's artwork.

Throughout the set, Morgan's empathic connection with Frisell is palpable. While there are passages where Morgan and Frisell take delineated solos, far more are spent in a kind of collective and egalitarian space where the music is more a conversation than anything else, and one that often moves in the most unpredictable directions. The duo's look at Joseph Philbrick Webster and Maud Irving's classic "Wildwood Flower," which Frisell first recorded on his 2000 solo guitar outing Ghost Town (Nonesuch), is more roots-driven and countrified on Small Town. The version on Epistrophy, on the other hand, is more open-ended and free-wheeling (albeit subtly so), its completely rubato interpretation here suddenly shifting, at around two-and-a-half minutes, into a soft but propulsive version of The Drifters' 1962 hit, "Save the Last Dance for Me."

Jerome Kern's "All in Fun," first performed live in 1939, and David Mann's 1955 hit for Frank Sinatra, "In the Wee Small Hours of the Morning," bookend Epistrophy. Both are lovely ballads that nevertheless demonstrate different aspects of Frisell and Morgan's approach to interpretation. "All in Fun" is, indeed, a more fun album opener, with the increasingly in-demand Morgan demonstrating the special relationship he's forged, in such a relatively short period of time, with Frisell. His Haden-informed tone and attention to the detail of every note helps define the pulse while, at the same time, acting as a melodic foil that pushes and pulls Frisell as much as the guitarist does here, and throughout the set.

"In the Wee Small Hours of the Morning" is more tender, more poignant, more hauntingly beautiful, and a lovely way to end the set. Over the course of nearly seven minutes, Frisell's ability to blend gentle lines—lyrical, but in a distinctly Frisell-ian fashion—and warm voicings is matched by Morgan, the pair demonstrating that overt virtuosity is far from a determiner of great music.

Instead, throughout Epistrophy (including a brief but delicately charming, by turns in-time and no-time look at Billy Strayhorn's evergreen "Lush Life"), Frisell and Morgan make clear that they view music through a different prism. First and foremost, the song: what makes it tick; what signature(s) defines it; what, at its deepest core, it is. Second: communication that's as open as possible, allowing the music to go wherever it may, rendering each and every performance as completely different from the last. Finally: the need to well and truly listen as much as play, leading to that kind of indefinable telepathy to which most aspire but so relatively few achieve.

Whether the music is original, or the interpretation of something traditional or sourced from the Great American Songbook, pop hits or jazz standards, with two musicians as clearly connected as Frisell and Morgan, the only thing that's predictable is their sheer unpredictability. Epistrophy may swing a little more, and lean a little heavier on the jazz tradition (even when interpreting traditional folk music like "Red River Valley") than Small Town, but taken together, these two extraordinary recordings more fully and completely reveal this unique duo's broad musical purview.

Now, with the hope stemming from Small Town fulfilled—another recording from the duo with its equally compelling Epistrophy—there's now yet another wish: the chance for a document of this duo after a couple of additional years' occasional touring. If their connection was this strong in the spring of 2016, imagine how it is now, three years later?

All in Fun; Wildwood Flower; Save the Last Dance for Me; Mumbo Jumbo; You Only Live Twice; Lush Life; Epistrophy; Pannonica; Red River Valley; In the Wee Small Hours of the Morning.