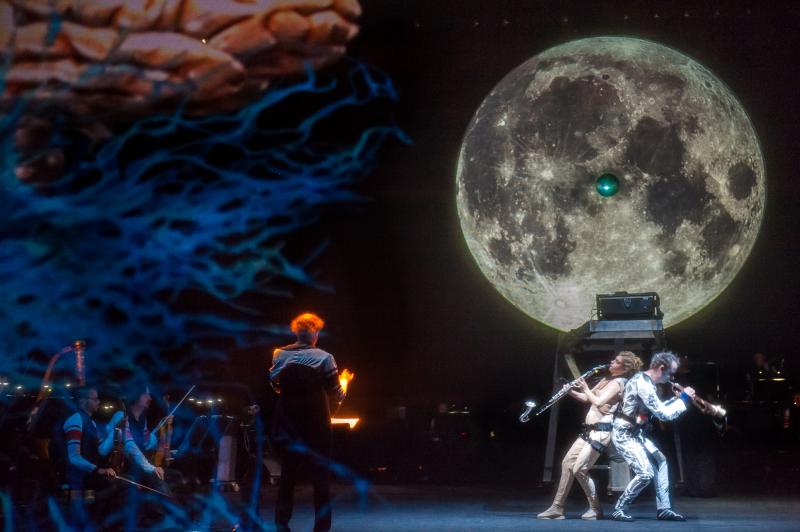 Karlheinz Stockhausen and Sun Ra must surely vie for the stellar position of most cosmically attuned composer within the bounds of the omniverse. Stockhausen's Licht is arguably his major work, at least in terms of sheer scale. It's a seven-day-long operatic cycle that its composer must have been relieved to complete before his demise. This performance of "Michael's Reise Um Die Erde (Michael's Journey Around The World)" is a mere fragment when set beside the whole sprawl, lasting only around an hour. It's the second, instrumental, act of "Donnerstag," composed between 1978 and 1980. Consequently it's a compacted, highly detailed musical journey, seemingly epic within the bounds of its minutes, but of interlude size once returned to its gargantuan context.

Presented as part of the 2013 Lincoln Center Festival, this was the last of a three-night stint, so was probably the most smooth-flowing of all, particularly as it involved an elaborate staging along with its musical complexities. Cologne's Ensemble musikFabrik already have a sturdy history of interpreting Stockhausen, having given the world premiere of Sonntag Aus Licht in 2008. An assemblage of over 30 players, the palette including flutes, oboes, bass clarinet, bassoons, trumpets, trombones, tuba, percussion, harp, keyboards and strings. The pivotal role of Michael is taken by trumpeter Marco Blaauw. The word "pivotal" is deliberately chosen, as Blaauw spent much of the performance strapped into what looked like an astronaut's harness, set on the end of a gantry that swooped and swiveled as he issued his crisp fanfare statements.

The players were garbed in flamboyant costumes, silver abounding. A gauzy filament front-drop provided a transparent screen onto which were projected glowing curlicues of light and flickering images. Planetary masses slid past the eyes. Blauww rotated and ascended, the motion emphasizing his horn phrases rather than distracting from their essence. The entire flow was held in a kind of meditative stasis as each event unfolded with a dignified, gradual process of sonic tendril-snaking.

Stockhausen's work has always mixed the scientific and the ritualistic, and this piece managed to be precise, pointed and scalpel-sharp to the analytical mind, but without losing its spellbinding aura of an almost pagan ceremony, a dreamlike transmission towards its climax of Michael and Eve, prancing together in a dialogue (Nicola Jürgensen played basset horn), eventually rising up to the stars on a shared gantry. Almost as dark comic relief, a "clownesque swallow pair" of clarinetists shifted attention momentarily to their own capering conversation.

The stage direction of Carlus Padrissa was seductively dominant, but the players dwelled within a luminous firmament that heightened their articulations into a mystical state, totally captivating whilst being supremely relaxing. An immersion in the alternate universe of Stockhausen, who characteristically completed his grand concept by requesting that the audience clad themselves in electric blue gear. The composer would probably have appreciated the closing touch of trumpeters playing goodbye to the exiting crowds, from on high in the outside walkway levels, ensnaring them with a further preparation for the thoughtful journey home.

If an artist had a dream about his ideal gig, it would be something like this album release party at the Poisson. The Trinidadian trumpeter Etienne Charles was heralding his Creole Soul (Culture Shock, 2013) spinner, promoted by the Revive posse, those prolific organizers of hip jazz'n'groove gigs around NYC. The joint was in full jazz-club mode with all tables occupied, surrounded by a massed circle of standees. Charles is frequently found as a sideman, but now seems set on establishing his own sound, delivered by his own large-scale band. He's now up to his fourth record. The direction is emphatically thrusting towards Caribbean jazz, and the delivery of a thoroughly optimistic sound.

The leader's parents were in the house, and it was his 30th birthday. At least that's what he hinted at, without voicing that dreaded number. Fear of being over-the-hill! Ultimately, these were the makings of a fine night out, with the set only beginning just before 11pm.

Charles is a dominant force, both in terms of his effervescent personality and his frequent trumpet scattershots. He's also very open to the spreading of responsibility across his ensemble. Tenor saxophonist Jacques Schwarz-Bart parried him with equal ferocity, balancing the front line's soloing power. Further thrills were provided by the three-piece drums'n'percussion team of John Davis, Daniel Sadownick and D'Achee, the latter goaded into unveiling the longest dreadlocks in the land. Charles even joined them on djembe at one point, intensifying the pulse. At times, their driving lattice-work threatened to be ceaseless, and we certainly weren't complaining. All the more exciting when the entire band kicked back in with a theme. Eventually.

There were a few dips in content, mostly of a slow and sentimental nature. The Mighty Sparrow's "Memories" and Bob Marley's "Turn Your Lights Down Low," both featured on the new album. These songs sounded bland beside the majority of pulsating material, but the reading of "You Don't Love Me (No No No)" (popularized by Jamaican singer Dawn Penn) fared much better, managing to transcend its too-frequent selection as a cover version. The result of this latest Charles project and lineup is to explore the density of fun, exploring a highly commercial set of ingredients, but filtering them through a jazz lens full of hardened soloing prowess. It's akin to what England's Courtney Pine has been attempting in recent years, but Charles is succeeding in capturing a far rootsier vibration.

Pulverize The Sound, in a mellower mood? Well, only relatively. There was that monstrously aggressive, volume-maximized appearance at the 2011 Vision Festival, where this trio sounded mostly indebted to diseased (if serried) thrashcore. Now, two years later, they're refining their character, delving into other areas that were always present anyway. Jazz, improvisation, minimalism, droning, moderne classical. Perhaps it's just that they performed at a quieter, more contained level for this Roulette gig. It was easier to hear the details of texture, and savor the spaces between the intricately worked out sensitivities of trumpeter Peter Evans, bassist Tim Dahl and drummer Mike Pride.

Dahl had toned down his distortion, so now sounded more proggy than thrashy. Evans is an expert at needling accuracy, matched with an astounding stamina, particularly when he sculpted extended and suspended tones through the employment of circular breathing. Lesser beings would use a laptop or sampling pedal. Pride moved beyond the drum kit, getting into gongs and polystyrene, rummaging in his percussion bag, or chiming the chimes, in perfect staccato time with his cohorts.

Their set approached the 90 minute mark, as they'd just completed two days of work-shopping and collaborative composition at Roulette, adding to their growing repertoire. The result was a series of spikily antagonistic pieces, a ballet of delicately tip-toed violence. Clipped like a chipping ice pick. It's a profoundly group-orientated music, each player serving the ultimate mission with masterly concentration.

For My Sweet is a relatively obscure community venue in the Bedford-Stuyvesent part of Brooklyn, with jazz gigs happening every Monday evening. On this particular night, the proceedings were moved into the rear garden area, with two sets from trumpeter Ahmed Abdullah's Diaspora. Only in NYC can we see a combo of this caliber at such a low-key joint. An open-microphone intermission is a feature at For My Sweet, and who should turn up in the audience but Amiri Baraka. This revered poet didn't need too much persuasion to stand up and intone one of his own works (part of "Wise, Why's, Y'z"), to hushing, transfixing effect.

Abdullah, perhaps only half joking, says that Sun Ra came to him in his sleep, a ghost-presence suggesting that Diaspora should mean Dispersions Of The Spirit Of Ra. A large part of the band's songbook is therefore taken from the Ra repertoire, mostly the tunes that feature ensemble vocal chants. Another element is provided by Abdullah's wife Monique Ngozi Nri, who recites what are mostly her own poems, in the spaces between Ra's cosmic space. So here's the all-star line-up: Alex Harding (baritone saxophone), D.D. Jackson (keyboards), Reggie Nicholson (drums), and the odd one out, mysterious bassist (electric and acoustic) Radu, apparently a local to Bed-Stuy.

Nri laid Margaret Walker's 1942 poem "For My People" over a funky but free tune, dominated by a raging baritone solo. Every spotlight stretch by Harding was delivered with maximum expression. The following section featured a group vocal, with drums and communal clap-along, rising up from a Nigerian Ebo tribal foundation. Another baritone solo jolted out, this time of a borderline tormented nature, full of aroused passion for sonic roughage, set in the midst of Sun Ra's "The Mystery Of Two." Jackson followed this with a volcanic keyboard solo, his M-Audio controls set for an electric piano sound, crunched with bassy distortion. Harding and Jackson competed for the most out-there sense of urgency, but the bandleader operated on another, no less profound, plane. Abdullah issued glistering spurts of horn-dust, often muted to create an even more tightly controlled swirl in sound.

"Strange Mathematics" blurred into "We Travel The Space Ways," the latter prompting the band to perform their cosmic hop, which soon spread its off-beat charm into the audience. The second set wasn't as majestic as the first, loosening up into an even more varied collection of material. Reggae with a South African scent, then another Ra song, "Love In Outer Space," which entered an epic multi-movement orbit, dispersed and perhaps slightly too rambling. Then, they closed out the set with an incongruous "Iko Iko," offering a jaunty New Orleans romp to leave the crowd in a more terrestrial state.