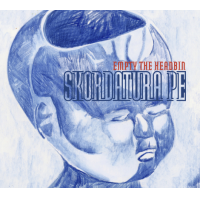 The Belgian quarter has altered their name, actually shortened it from Skordatura Punkjazz Ensemble to Skordatura PE. They still are jazz artists playing punk jazz, not just punks playing jazz. There is an important distinction here. You see they can play, no really play. Their Punkjazz is that of Jaco Pastorious, Mike Stern, and Wayne Krantz— gritty, rocked-out non-commercial jazz.

Empty The Headbin follows their inaugural, self-produced release How To Chase A Minute In One Second (2014) and it dives deeper, and maybe even a bit meaner, into the heaviness thud produced when you drop notes into the void.

The disc opens with the loose-fitting drag of "W.Y.D.G.S.O.Y.Y.W.G.S.O.S.E." ($5 for the person who tells me what this acronym stands for) with its leaden, rumbling bass line and bouncing drums. It gives a nod to sinister stimulus and malevolent motives. The quartet tears through the Steve Coleman M-BASE inspired "Golfslag" with its guitar/keyboard sprint and repeated lines that feature Jacob Haghebaert's reeling solo. "Caffeine Rush" surfs on the edge of distortion. Baseline fuzzy, keyboards pushed to the redline, and drums up front. But just then we are treated to an almost sweet bass solo, just before the fuzzy ending.

The last two tracks chart the band's growth. "Nee, Meneer, Ik Dans Niet Meer" (No, Sir, I Dance No More) is an intricate composition with tricky changes, handled quite skillfully and "Het Is Kleiner Dan Nu" (It Is Smaller Than Now) chills the disc with a minimalist haunting trip into the space-time continuum.

Could the shortened name Skordatura PE, stand for Skordatura Public Enemy? One could only hope.