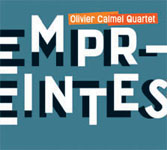 The pianist proves a fluent improviser on "D'humeurs changeantes," a rocked-out piece featuring distorted piano sound effects, and the more introspective "Epistrophe." Much like his composed lines, Calmel's ideas flow easily, never getting too bogged down or waning in interest.