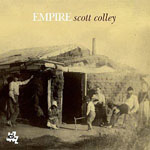 One of jazz's most ubiquitous bassists, Scott Colley has only released a handful of albums as a leader, compared to hundreds of sessions and live dates with artists ranging from Jim Hall and Andrew Hill to Chris Potter and Antonio Sanchez. Architect of the Silent Moment (CamJazz, 2007), was a particularly impressive combination of head and heart, traditional roots and forward thinking, acoustic and electric. One of 2007's best , it was a turning point for Colley—a new path that the bassist continues to explore on Empire, a sure contender for one of 2010's top picks.

Back from Architect, trumpeter Ralph Alessi and pianist Craig Taborn help make Empire a logical progression, but with drummer Brian Blade replacing Sanchez, and guitarist Bill Frisell fleshing the group out to a quintet, there's plenty of opportunity to explore other avenues, even as they spawn from the primary path defined by Colley's pen, responsible for all of Empire's ten tracks. "For Sophia" could be an outtake from Blade's Season of Changes (Verve, 2008), the four chords of Frisell's tremelo'd guitar and Blade's soft brushwork redolent of "Stoner Hill"'s folkloric Americana vibe, but starker still, with Colley's Charlie Haden-like solo of simple perfection mirrored when the ever-selfless Frisell takes over with equally flawless lyricism.

Beginning in quiet contemplation, the episodic "5:30 am" slowly picks up steam, as Alessi's plangent melody leads to an open-ended piano solo that quickly moves from focused melodism to more extreme expressionism, as Taborn passes the baton to Alessi with a repeated motif echoed by the trumpeter's own thematic start. Alessi solos with characteristic control and effortless virtuosity, bolstered by Colley and Blade, who turn up the heat with empathic support as the trumpeter mines the full range of his instrument, leading to Blade's ostinato-driven solo of lithe dexterity and full-throttled invention.

Form turns to freedom on "The Gettin Place," with Colley's staggered, yet still grooving pulse setting a gentle context for Frisell, whose inherent idiosyncrasy expands to contrapuntal orbit with Alessi, and a solo shifting from quirky to quintessential, as the guitarist creates layers of soaring distortion and jagged, processed harmonics. Coalescing into a series of shifting voicings, Alessi winds in and around Frisell's changes, his lightning-fast, cascading lines driven by Blade's own turbulence, rallying suddenly to bring down the dynamics for a slowly spreading coda that ultimately dissolves into the ether.

Whether it's the cerebral balladry of the dark-hued "Speculation," the angular, ambient lyricism of the bassist's rubato duo with Frisell on "Tomorrowland," his ambiguous, bass riff-driven duet with Alessi on "Gut," the oblique swing-meets-surreal of the quintet-driven "Five-two" or the abstruse but, amidst all this, more accessible "Now What?," Colley's writing acts like a lightning rod, encouraging a remarkable degree of free-thinking exploration amidst a group of charts ranging from detailed to sketch-like. More challenging than Architect, Empire may have been a long time coming, but arrives with an even more definitive sense of purpose and, given the chameleon-like demands on Colley as a sideman, a clear, cohesive and cogent conceptual voice.