By Troy Collins
November 30, 2010
Sign in to view read count 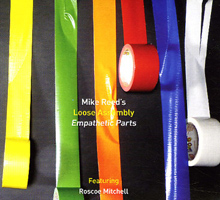 The Association for the Advancement of Creative Musicians (AACM) has nurtured the talents of Chicago's most inventive artists since 1965. Drummer Mike Reed, the venerable organization's recently appointed Vice Chairman, repays the favor on Empathetic Parts, with his longstanding quintet, Loose Assembly, by welcoming one of the Association's original founders, multi-instrumentalist Roscoe Mitchell, as featured guest soloist.

A veteran organizer and concert promoter, Reed's affinity for collaborating with his elders is reflected in his budding discography. Trumpeter Art Hoyle, saxophonist Ira Sullivan and trombonist Adi Braun were featured prominently on Stories & Negotiations (482 Music, 2010), Reed's previous release with his quartet, People, Places & Things. His other flagship band, Loose Assembly, is firmly rooted in Chicago's avant-garde tradition, making this encounter with Mitchell an interesting counterpart to the aforementioned session.

The album is dominated by the lengthy title track, an episodic work structured around the concept of "collective arranging," in which Reed equally distributes responsibilities for controlled improvisation among his band members. Alternating between conductor and sideman, each member directs the ensemble in turn, using techniques Reed adapted from his peers, cellist Fred Lonberg-Holm and trombonist Jeff Albert. Employing cues designed to ease transitions between sections, the piece segues gracefully between divergent moods, lending a naturalistic flow to the proceedings. Veering episodically from spare ruminations to coiled themes, the suite explores a plethora of moods over its 33-minute duration, from spectral pointillism and meditative ostinatos to fractious abstraction and vivacious swing, with copious space allotted for the guest soloist's contributions.

Spotlighting the lyrical interplay of Mitchell and Ward's plangent altos, a lavish arrangement of late AACM drummer Steve McCall's "I'll Be Right Here Waiting" brings the concert to a close, serving as a gentle coda and a persuasive reminder of the Association's aesthetic diversity.

Mitchell's congenial rapport with Reed's young quintet establishes a historical continuum hearkening back to his early days as founder of the Art Ensemble Of Chicago, a seminal collective whose influence over this date is both undeniable and intentional. A cross-generational summit meeting between one of the organization's key founders and its newest heir, Empathetic Parts truly embodies the AACM's credo, Great Black Music, Ancient to the Future.