By Eyal Hareuveni
September 26, 2014
Sign in to view read count 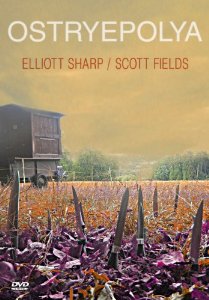 The musical meeting of innovative guitarists Elliott Sharp and Scott Fields came by coincidence. Both were aware of each other's work for many years, but the opportunity of playing as a duo never arose. Each is a master composer and improviser with extensive experience accumulated in various formats. Sharp pioneered the usage of fractal geometry, chaos theory, genetic metaphors and using software in his compositions. Fields, who, like Sharp, plays the soprano saxophone, was commissioned for orchestral compositions.

When Scott was performing in Lisbon and heard Sharp was scheduled for Lisbon's Jazz em Agusto festival, he joked with the Clean Feed label manager Pedro Costa that it would be a good idea to play with Sharp. Costa thought that was an excellent idea, and Fields emailed Sharp, who liked the idea. The pair played few concerts and Costa arranged the recording sessions that produced Scharfefelder (Clean Feed, 2008) and Afiadacampos (Neos, 2010).

The DVD features two performances. The first at the Loft in Cologne on May 2009, and the second at the NOZART festival in Cologne on March 2010. Cameras focus from various angles on two tall, bald-headed guys seated facing each other and playing custom-made steel-stringed acoustic guitars in small spaces. The two blur any attempt to categorize their music in distinct genre or style. They move freely between free improvisation, sonic searches, minimalism, blues and contemporary music in compositions based on conventional notation or graphic notation, all with impressive command, elegance and sharp sense of humor.

The two have different approaches, though both are interested in finding new forms and structures. Sharp tends to be more provocative, investigating the guitar's timbral range, searching weird-sounding tunings, non-Western sonorities and the syntax of any musical motif or sonic fragment. Fields is often the more reserved player, opting for a clear narrative and theme. They have developed an affinity and their relaxed, supportive interplay contributes to their ability in completing ideas and deeply understanding each other. Sharp and Fields do not try to deny differences in their musical languages. They explore their unique identities through these arresting interactions and spontaneous interpretations.

The generous DVD offers, beside the two live sets, a short interview where both talk about their approaches and musical bond, plus an insightful 26-minute recording session.