By NENAD GEORGIEVSKI
April 29, 2017
Sign in to view read count 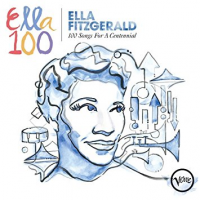 Blessed with an instantly recognizable voice full of youthful exuberance and a three-octave range, noted for its pristine and pure tone, the legendary jazz singer Ella Fitzgerald is, along with singer Billie Holiday, the most important singer of the 20th century. She has been called "The Undisputed Queen of Jazz Singing" or "The First Lady of Song" and these nicknames simply reflect the remarkable and inimitable vocal abilities she possessed. While her incredible technical abilities were pretty much evident, when she sang, Lady Ella radiated with pure joy and a heartfelt passion. Ella lived to sing and loved to perform. Even singer Frank Sinatra, the Chairman of the Board when he sang a duet with her in an interview in 1959 admitted to being unnerved and said: "Ella Fitzgerald is the only performer with whom I've ever worked who made me nervous because I try to work up to what she does. You know, try to pull myself up to that height—because I believe she is the greatest popular singer in the world, barring none, male or female."

To mark the 100 years after her birth, 100 Songs For A Centennial Collection celebrates her long and illustrious career with a beautiful selection of songs drawing from the singer's Decca and Verve years when she was in her prime. As a starting point to Fitzgerald's work, this collection is unmatched by any other "best ofs" or "gold collections" and is an almost perfect compilation in that all of her most noted tracks are here. Spread onto 4 CDs, 100 Songs For A Centennial celebrates the crème of Fitzgerald's illustrious career and the selection moves chronologically highlighting every chapter from earliest punches to those unforgettable, timeless classics. Over that period, Ella recorded and performed with big bands, jazz groups, and symphonic orchestras. The breadth of her repertoire included all kinds of songs from jazz songs, carols, blues, calypsos, bossa-nova to Latin music, show tunes and opera, and this collection gives an opportunity to have it all in one place.

Ella began singing and dancing on the streets of Harlem for tips. Initially, her dream was to become a dancer and it was faith that one night while too intimidated to dance at a talent contest in 1934 at the Apollo Theatre instead she sang a song that simply silenced the dumbfounded audience and won her the first prize. Very soon she was invited to sing with the Chick Webb's Big Band, one of the hottest swing bands of the era that propelled dancers into orbit. Naturally, at the start she was unformed, but she had the ability to read music and to learn the songs in a second. While these songs are from another era and the sound quality is far from pristine, they still burst with joy and energy. There is something magical that is happening on each of these songs regardless of the era when these songs were recorded, arrangements is how Ella throws herself into the music. She invests herself thoroughly and her performances often transcend the material. It's her passion and joy that push any of these songs into the realm of greatness. This ability is what has always distinguished her from the lot or the ability to wring something out of any kind of song. Her biggest success came in June 1938, which eventually became the biggest hit of her career with "A-Tisket, A-Tasket" a bestselling record for three months at the time. Unfortunately, Webb suffered from tuberculosis and eventually died in 1939 with the orchestra continuing under her name up. When the orchestra broke in 1942 she pursued a career as a solo artist she became renowned for her virtuosity with the wordless vocals i.e. the scat singing. She wowed listeners on songs such as 'Oh Lady Be Good" with her vocal inventions that laid the foundation for her shift from a swing band singer to modern jazz diva.

Produced by Norman Granz, the Songbook series are one of Ella's career highlights and greatest achievements. Under his guidance, Ella firstly released Ella Fitzgerald Sings the Cole Porter Songbook and over the next decade, she would focus on the works of other composers such as George and Ira Gershwin, Richard Rodgers and Lorenz Hart, Irving Berlin, Duke Ellington, Harold Arlen, Jerome Kern, and Johnny Mercer. By 1964, she would record around 250 songs for this project. No other singer has surpassed the excellence of her delivery and interpretation. She elevated the works by these people to be recognized as art songs. Cole Porter who was mainly disinterested about how jazz performers have approached his work responded in exclaim to Fitzgerald's recordings of his music: "My, what marvelous diction that girl has." Even Ira Gershwin, upon hearing her interpretations, have said: "I didn't realize our songs were so good until Ella sang them." Further, the collection spreads to famed collaborations and material like the duet recordings with trumpeter and singer Louis Armstrong.

But the collection centers only on Ella's Decca and Verve years which really is her finest period. The compilation should have stretched further. After collapsing on stage in 1965 so began the decline of her health and change of fortune. Her contract with Verve was not renewed in 1966 and the quality of the material she released for Capitol was not Ella's most representative. Still, she performed with symphonic orchestras, she began working with pianist Tommy Flanagan, there are the famous duets with guitarist Joe Pass and the song book of Brazilian composer Antonio Carlos Jobim. Due to complications with diabetes, she had problems with her eyesight, heart problems but she still performed at least once a month to enthusiastic crowds until the '90s.

It's impossible to imagine today's music without Ella Fitzgerald. No singer can come close when Fitzgerald was in her prime when it comes to stylistic range, intonation, and stamina. Her performances often transcended the original material and the songs became a platform on which her voice could work miracles. Again, every song regardless of date of production in this collection is a masterclass in singing and many are considered standard jazz repertoire. She is able to sing these songs so effortlessly and to make them full of life and emotions. They are delivered in a sweet voice that could leap and glide with ease. Many singers who followed her in jazz cite her as an influence. But more remarkably, her influence has spread well beyond jazz. But, to be a lasting presence in jazz, one also has to have something to say that comes from your own life. As Charlie Parker said: "Music is your own experience, your thoughts, your wisdom. If you don't live it, it won't come out of your horn (or your singing)." What Ella had was a signature sound where from the first note it is evident who is telling the story, her story. Each song in this collection showcases that she was and still is the First Lady of Song.