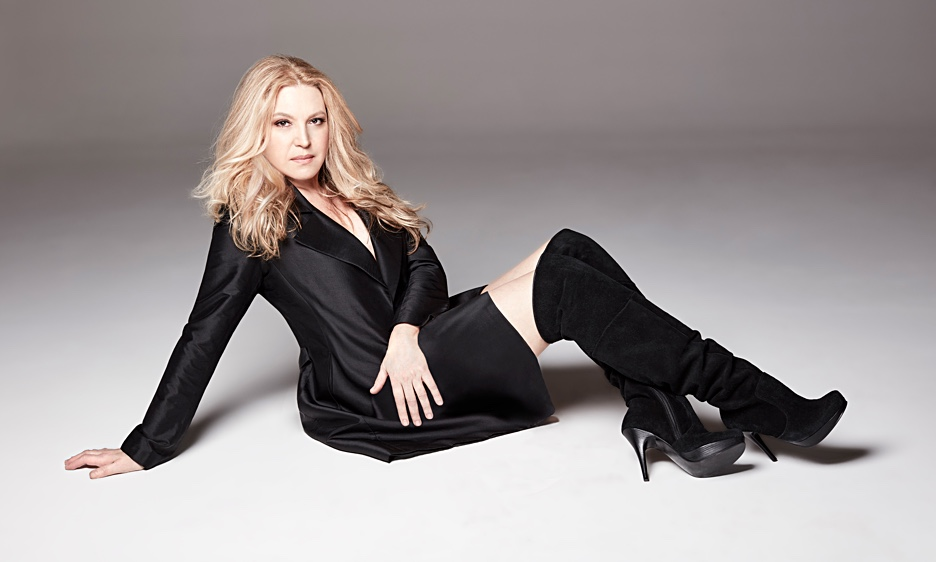 The human voice, singing the words, is a big form of expression
&#151Eliane Elias

Eliane Elias has glistened across the global music scene since first coming to the United States in 1981, playing fiery jazz, beautiful pop tunes, and warm and charming music from her native Brazil. She became established as a major jazz pianist. But as her career has grown and her popularity has endured, she's become known as something else.

She probably always sang, even as a child and then a child prodigy, studying piano at age seven and teaching piano and improvisation in Sao Paulo at age 15 (her performing career began at 17, working with Brazilian icons Toquinho, Vinicius de Moraes and Antonio Carlos Jobim). But as her career has moved along, the voice has become an important part. In Japan, she has garnered multiple awards for her vocal recordings.

Over the last decade or so, each recording project has shown something different, all including her magnificent piano approach. But many have also brought her voice to the forefront. I Thought About You (Concord Jazz, 2013) is a tribute to Chet Baker, and finds her in a sultry mood, invoking the image of a smoke-filled club in the wee small hours. The Grammy Award-winner Made In Brazil (Concord Jazz, 2015) exhibits her interpreting the music of her home. Bossa Nova (Blue Note, 2008) is mostly that, and Elias makes her mark as one of the great interpreters of the Brazilian style, wistful and soulful. Dreamer (Bluebird, 2004) merges melancholy and sugar, and when she sings "Call Me" you wish you could look for her number. Dance of Time (Concord Jazz, 2017), another Grammy winner, combines both the beautiful spirit of Elias the singer and scorching pianist.

Now arrives Love Stories (Concord Jazz, 2019), imbued with lush arrangements and the typical passion that marks all of her work. It was created in trying times for Elias, but like diamonds and pearls, the pressure culminated in beauty. She is also arranger, composer, lyricist and producer. Sung almost completely in English, the album features original compositions and arrangements of songs made famous by Frank Sinatra and Jobim.

She first sang classic Jobim songs on Eliane Elias Sings Jobim (Blue Note, 1998). But a decade later, she told All About Jazz: "I heard one of my recordings from years ago, and it sounds like a different person. It was so shy, the way I used the voice ... and then I started doing more and more, and I started feeling so comfortable, the place that I got with the voice."

In August 2019, Elias is assured and at home. "I'm in a whole different place, vocally speaking," she says from her Long Island, NY residence. "The human voice, singing the words, is a big form of expression. It's very different, using your voice than playing on the piano. At first, when I started singing, I used to resist giving everything up to the voice. Today, I am comfortable. Especially this record. It really focuses on the arranging. I always play the piano, write the arrangements. But the voice is featured.

"The idea for this album was to bring to life various stories of love and loving through this collection of songs."

Brazilian guitarist Marcus Texiera and drummers Edu Ribeiro, Rafael Barata and Celso Almeida join American bassist Marc Johnson to bring the music to life. Robert Matheson orchestrated the Elias' arrangements, his fourth album project with her that include Made in Brazil. The songs, lush and captivating, include: "A Man and a Woman," from a 1966 Oscar-winning French film; "Baby, Come to Me," made famous in the 1980s by Patti Austin and James Ingram; "Bonita," on which Sinatra and Jobim collaborated in the '60s; and two nods to Sinatra in "Angel Eyes" and "Come Fly With Me," both done in a way that is all Elias.

" I love the process," she says of the development of Love Stories. "From the moment I start coming up with a song and figuring out what key I'm going to sing it in and how I'm going to create the arrangement and a beautiful recording. It was beautiful to be able to express what was inside my head and inside my heart. It was really beautiful. Special."

More remarkable, considering the circumstances. She worked on the music for Love Stories, through breaking her shoulder while in Sao Paulo and, soon after, her the passing of her father. Elias had to remain immobile for months while recovering in her apartment there.

"I wasn't allowed to move, my left arm was in a sling and so, to avoid surgery, I had to stay immobilized and really still. I shattered my whole left shoulder. With surgery it could happen that I would be unable to play," she says. Rather than take the chance on losing her ability to play her instrument, "the doctors took what they called a conservative approach." Elias continues. "By doing that approach, I had to be immobilized. I couldn't move an inch for over six weeks. It was a difficult period for me, but at the same time, I found myself with time on my hands. That's when I realized I could only just move my right hand to write on music paper. Those tunes really focus on the voice and the stories they tell. I'm thrilled we were able to get the recording done for everyone."

It came out the way I dreamed," says Elias with her soft, but confident demeanor. "I had the vision first of: What is it that I'm hearing? What is it that I myself would like to be hearing when I'm just sitting here at home? That's how it started. Researching the material and what would feel good to me. This one was really focused on the voice, the arranging and the stories. In the middle of all that was happening, I lost my father, which was very difficult for me. There are no words for that. What I had to communicate with was my voice."

Attend a concert by Elias or listen to any of her jazz albums with the likes of Eddie Gomez, Jack DeJohnette, Randy Brecker, Billy Hart and Joe Lovano, or her duets with Herbie Hancock, and her talent as a pianist is obvious. Jazz remains her favorite music, and she can play blazing bebop or sensuous, wonderfully lyrical ballads that reaches the heart. As for singing, her main influences are Sinatra and Joao Gilberto. Her sources for material are wide-ranging.

"It depends on what I'm singing, but so important to me is Frank Sinatra during his golden, beautiful period, and Joao Gilberto. Joao Gilberto phrased in a way that was over the bar line and he accompanied himself. I relate a lot to a singer playing an instrument, accompanying themselves. He had a way of singing that was quiet. He had a way of singing that had great rhythm, but not like those crooners of the '50s that were loud. He was soft. With the invention of the microphone, he did really well," Elias says with a chuckle. "Frank Sinatra, the way he phrased. Every word means something. You really feel it. Those two were great influences."

"I have always had very eclectic tastes. I like good music. I like good songs. But I have always been able to hear songs, re-imagine them, and make something with them. The words, I want them to speak and bring a message. It's a whole other world to be able to bring that. Love Stories is a record that is 99 percent English. The previous two or three albums were not. This is new. The songs needed to do that," says Elias. "If a record is Brazilian or Portuguese, I can have different choice of material and styles and things. It's a fountain of inspiration that doesn't go away. There's a lot there that I like to do. Sometimes I'm sitting down and something crosses my mind. I write down. What is the meaning of that tune? I look for it and keep a list of things that I like to do, how I hear them or remember them. I write things, lyrics and things. It's a process to get them shaped a certain way."

September, 2019 started a brisk touring schedule. Elias is a road warrior whose concerts take her around the world to joyful audiences.

"When I do a show, I always sing, but I also accompany myself and play," Elias says. "I always have moments when the band is featured and I'm featured on piano, of course. But I always sing. I open up with a song to solo more and open up the arrangement. I bring some things that are staples [from older records] that I know people want to hear and that I know so much from playing them. That's what I will be doing. Music from Love Stories, but also music from other recordings, and opening them up for a live performance."

Another recording is already being considered.