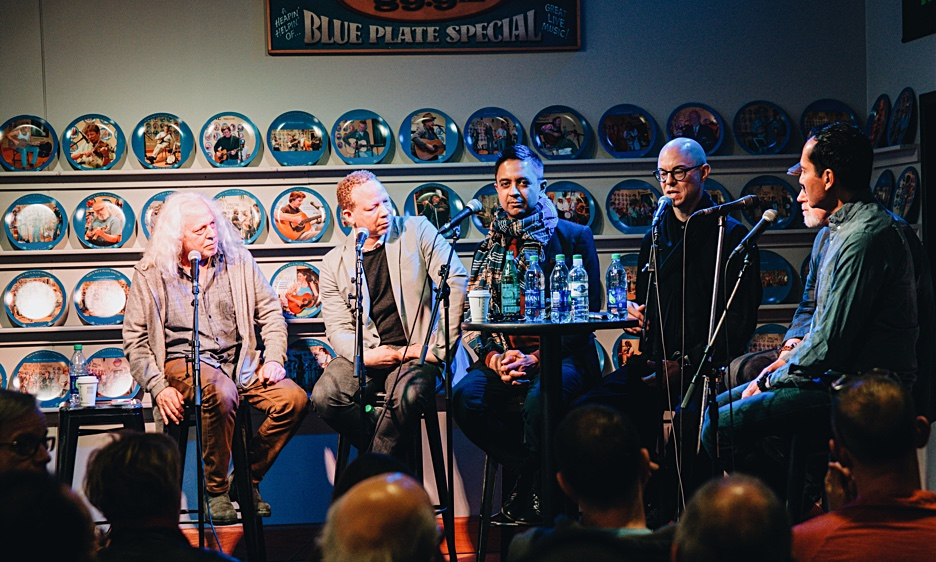 After noting that he had extended invitations to musicians from the classical New Edition side of the label who were at the festival (e.g. violist Kim Kashkashian), Chinen posed his first question to the panelists: what was your first ECM recording? Nik Bärtsch said it was pianist Chick Corea's Trio Music (1981): an example of music that was "between the lines." Vijay Iyer named pianist Keith Jarrett's Standards Vol. 1 (1983), and made the first mention of ECM's design-forward covers, which drew him to their LPs. Craig Taborn said he was drawn to the diversity of creative expression...and the covers.

David Torn mentioned a trip to a college radio station's music library, where he encountered reed player Bennie Maupin's The Jewel in the Lotus (1974) and Norwegian saxophonist Jan Garbarek's Afric Pepperbird (1970), as well as Norwegian guitarist Terje Rypdal's Whenever I Seem To Be Far Away (1974). Once again, the covers were cosmetically different from other labels. During the early years of the label Steve Lake was working as a music journalist in London, and wrote some of ECM's earliest reviews. He joined the staff in 1978, and again in 1990 (after returning to journalism for a while). He estimated that he had probably written over a thousand ECM press releases.

The label's albums are sometimes described as "cinematic," which also brings up the concept of auteurism (with the producer's role being similar to the role of film director in defining the vision of the project). Iyer said that Manfred Eicher often speaks of "dramaturgy:" each album representing a musical narrative. Bärtsch spoke about the sense of a clear journey ECM albums have. In his case, even a long track tells a story in itself, as well as contributing to the album's story. A follow up question dealt with Eicher as an active producer. Steve Lake said that sessions were all different, but something special always happened. In the current streaming environment he now questions the importance of the album format. Torn said that an album is different from a live performance, but they are both important. The album is an art form in itself.

The next topic was the diversity of ECM's roster. Iyer said that before coming to ECM he felt like the token American on his previous European label. ECM gave him the opportunity to work with artists like trumpeter Wadada Leo Smith, and the ability to express his full musical personality—one reason why his ECM debut Mutations (2014) featured a suite for string quartet, piano and electronics. Bärtsch said the label is about respecting artists, helping him to dive in professionally and musically. Taborn characterized the label as standing for excellence and progression, regardless of the musical genre.

ECM's recent move to the streaming service Spotify has implications. Bärtsch commented that a playlist can have dramaturgical meaning. Iyer pointed out that the object (CDs and LPs) still exists: hopefully the formats can coexist. Lake said that ECM was using playlists internally, plus the label was being bootlegged. So the move made sense, but they had mixed feelings about it. Taborn is concerned about the technical limitations of streaming and MP3s. Some listeners nowadays do not even own quality playback equipment.

The big question of the day: what does the label's 50th anniversary mean to its artists? Iyer said that they must each figure out what's next for themselves. Lake pointed out that ECM's influence has spread to other labels (e.g. Nonesuch Records). The story of Big Ears founder Ashley Capps' meeting with Manfred Eicher to discuss the celebration was told again. Supposedly Eicher wanted to discuss future releases rather than talk about the past. But Torn disbelieved the interpretation that the anniversary means nothing to Eicher. How could 50 years not mean anything?

The final question was about the sympathetic resonance of Big Ears hosting the celebration. Torn said if feels right: he had been wanting to perform at the festival for a long time. It caters to audiences open to things they have not heard before. Bärtsch expressed interest in finding out more about how the festival works. Lake commented that disparate artists like free-jazz saxophonist Evan Parker and eclectic folk musician Rhiannon Giddens felt complimentary at the festival.