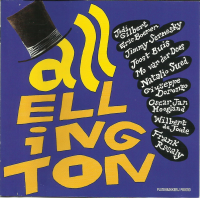 When Eric Boeren assembles a cast of musicians to play the music of Duke Ellington and Billy Strayhorn you know it won't be your father's Ellington. Well, unless your father is very, very hip. You probably already expect this, knowing Boeren has been a mainstay of the new Dutch swing for decades. With his All Ellington tentet, he relies on a cast of skilled improvisers to enliven music written and recorded fifty, sixty, seventy and even eighty years ago.

The music is formulated as a series of medleys with songs bridged together by way of improvised passages. Opening with what sounds like the pulse of a car alarm going off, the music kicks into a tightly arranged version of the 1939 Juan Tizol & Jimmy Mundy ballad "Night Song" before an improvised interlude of extended technique ushers in Jodi Gilbert's wordless vocalese of "Strange Feeling" which then morphs into the Strayhorn lyrics. The medley next includes "Sonnet For Sister Kate" from Such Sweet Thunder. Boeren mixes and matches Ellington from various decades to great effect. He borrows another composition, "Sonnet In Search of a Moor" from Such Sweet Thunder later in his medley that includes "Lament For Javanette."

The sounds are inspired by the thrill Ellington's music possessed back in the day and, refreshingly, the pieces are not performed simply as repertory music. That is because Boeren and company have been performing this music on a regular basis since 2013 and, after a 2017 week-long residency, they further refined their approach, as is evident here. For Ellington-philes, the adaptations of the lesser-known pieces are the gems. Other listeners can savor covers of the familiar "(In My) Solitude," "Black And Tan Fantasy," and "Sophisticated Lady." The latter piece opens with Wilbert de Joode's bowed bass, then articulated vocals and Giuseppe Doronzo's lush baritone saxophone, before congealing into an ethereal improvisation. Drummer Frank Rosaly suppresses any big band urge to grandstand, sticking with a support role, but adding minimalist accents and inflections. Did I mention there are also fantastic solos from Boeren, Joost Buis, and let's not overlook Oscar Jan Hoogland´s piano interpretation of Ellington? This music will either bolster your love of Duke, or send you back deep into his catalog.