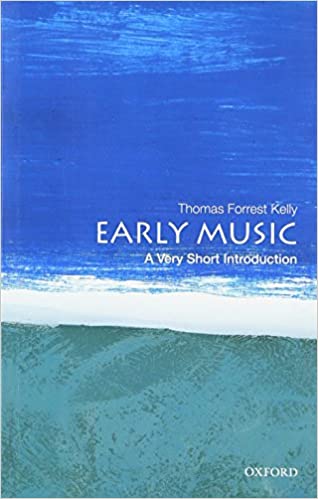 There is a Romantic desire to get back to the beginning of things because, somehow, a certain purity is believed to have existed that has since been sullied by modernity and all of its depraved trappings. During the folk music revival of the late '50s and early '60s, scores of record collectors wiled away much of their youth seeking out 78-rpm shellac blues and jazz recordings made in the interim of the first and second world wars. They were seeking the ur-music: an expression so pure as to be creatively altruistic. These dreamers wanted to hear how the music sounded at some anonymous 1925 house party held on Stovall's Plantation, the great flood still two years away, a sound impossible to hear because it has already been and is therefore gone forever, only to be considered in the abstract.

Early music expert Thomas Forrest Kelly dope-slaps those readers eagerly expecting to learn how the first music (at least, the first Western music) sounded into an approximate sense of reality. In his Early Music: A Very Short Introduction, he deftly teases apart the difference between hearing music live in performance as opposed to hearing a recording. A single unrecorded performance stands alone, ceasing to exist as the last note drops into silence. No two performances are ever the same. Each is dynamic only in their execution and not even static after. Our heads immediately grasp these facts among others, while our fickle Romantic hearts only hope to hear what the first plainchants sounded like.

Once these matters of perception are struck and focused, Kelly proceeds to define what early music is and is not. After much hemming and hawing about the meaning of "early music," he opts for the meat-and-potato definition, framing early music as composed and performed during the Medieval (ca. 500 to 1400), Renaissance (1400 to 1600), and Baroque (1600 to 1750) periods. The French Revolution in the middle of the Classical period (1750 to Beethoven's death in 1825), when music of the past was largely marginalized and destroyed in favor of the coming Romantic period, may be assigned as the end of the early music era. This same breaking point defines the difference between what has become modern interpretation and historically-informed performance—though the latter is a modern conception.

For the better part of the last century, Romantic ideals have ruled in performance. This typically manifested in slower tempi and larger orchestras and choruses, making everyone from Bach to Beethoven sound like Mahler or Bruckner. Understand that this is an aesthetic. It is neither bad nor good. It just is. The period performance era beginning in the '80s ignited an ongoing "discussion" (the word used rather than "war"). The biggest bone to pick is that it is impossible to know how Handel heard the debut of his Messiah performed in Dublin in 1742, though that is what scholar-musicians now attempt to recreate. All that exists today are manuscripts, orchestral definitions, and instruments from the period that try to approximate a performance that "might" have occurred.

To get beyond the hairsplitting, compare Sir Thomas Beecham's performance of Messiah, orchestrated by Eugene Goossens and performed by an orchestra and chorus greater than double that used by Handel at his premiere, with the shot-over-the-bow 1997 performance imagined by Sir Christopher Hogwood and the Academy of Ancient Music. Where Beecham's performance is, by measure, lumbering and musically profligate (though his version is uniformly well-respected), Hogwood's interpretation is firm and taut with rapid tempi and well-realized instrumentation. The sound and performance are scintillating. These differences are ultimately what is at stake in early music and historically-informed performance.

Once Kelly escapes this discussion, he gets down to business by defining the repertoires of the three periods and their major composers. Kelly hits the high points, not getting bogged down in historic minutiae. He gives non-musician-friendly examples of performance characteristics and practices that go some distance demystifying the music. He ends his slim volume with a discussion of the modern early music revival and an introduction to its major players and record labels—as with the composers, again choosing only the best known.