BY JEFFREY UHRICH
April 1, 2014
Sign in to view read count 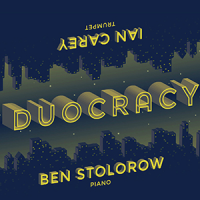 Trumpeter Ian Carey and pianist Ben Stolorow shed all inhibitions and strip down to the bare essentials with their provocative new release, Duocracy. As seasoned veterans of the San Francisco Bay area jazz scene, Carey and Stolorow each have released critically acclaimed albums as leaders and began playing together while gigging in the Bay Area. The two decided on the duo format as the most expedient and inventive format, albeit risky, to explore their improvisational chemistry as musicians. The satisfying and entertaining result is Duocracy, providing a deceptively traditional and early jazz vibe, while cleverly injecting a melodically mainstream feel, as the duo digs into a variety of jazz classics and American songbook standards.

The disc opens with "Little White Lies" by Walter Donaldson, recorded by Ella Fitzgerald and also associated with Dick Haynes. Carey and Stolorow quickly establish that a little bit of nostalgia is to be encouraged, as they deftly manage the roles of accompanist and soloist while also maintaining the timeless melodic structure of the song in the midst of their impressive improvisations. Ray Noble's "Cherokee" is a stand-out track, diving into the bebop generation with aplomb. Stolorow shines as he subtly begins the piece in the background while Carey crafts a captivating solo, then before you know it Stolorow steps to the forefront and attacks with a beguiling melodic improvisation while Carey provides restrained support.

The duo bravely takes on Thelonious Monk's "Four In One," a dazzling focal point of Duocracy that maintains its swing while impressively respecting the technical complexities of the original, yet still giving the tune their own personal flair. The duo's original composition "Comin' Along" is an impressive example of the chemistry between Carey and Stolorow, with an abstract and intuitive musical interchange between piano and trumpet that demands the listener's attention. The disc concludes with the reflective and thoughtful "All Things You Are" by Jerome Kern, a fitting and albeit satisfying culmination to the music.

Duocracy delivers not only a unique musical experience in the form of a well-crafted and highly skilled piano- trumpet duo, but offers a nostalgic trip to an era of traditional standards with a modern flair.

Little White Lies; You Took Advantage Of Me; Cherokee; Goodbye; Four In One; Two For The Road; Social Call; Comin' Along; How Long Has This Been Going On?; All The Things You Are.