Meilana Gillard: Dream Within A Dream 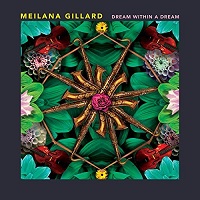 There are eight years between Ohio-born, Belfast-based tenor saxophonist Meilana Gillard's impressive debut, Day One (Inner circle Music, 2009), and her follow-up, Dream Within A Dream (Lyte Records, 2017) -simply way too long a gap for a musician and composer of her talents. Her debut, backed by Nir Felder, Tyshawn Sorey, Marcos Varela and Sam Barsh, flitted between classic jazz balladry and a more contemporary, upbeat vibe. For this all-acoustic outing, Gillard pins her old-school colors firmly to the mast, her warm yet bracing tenor sound echoing a tradition that runs from Sonny Rollins through Joe Lovano on a set of persuasive originals.

Gillard, who her honed her chops alongside A-listers in New York, is joined here by two of Ireland's finest—Mobo Award-nominated drummer David Lyttle—a veritable one-man industry—and in-demand bassist Neil Ó Lochlainn of contemporary folk/crossover groups Eriu Ensemble and Cuar. Gillard played with these two on and off for a couple of years, but it was a well-received concert at The Mac in early 2016, playing in Lyttle's trio with O'Lochlainn, that rekindled her enthusiasm to record -with the same musicians. It's easy to see why.

The trio's empathy is clear from the opener "Gene's Scene," with drummer and bassist providing empathetic support to Gillard as the saxophonist lays down an early marker with a fluid, blues-tinged improvisation of beguiling charm. Ó Lochlainn then teases out a leisurely, spacious solo of his own, with Lyttle artfully managing the trick of buoying and animating without casting too intrusive a shadow. The drummer briefly stretches out as Gillard returns, his subtly dynamic stick-work coaxing myriad colors from his kit. The head-solo-solo-head pattern is repeated on strong tunes like the upbeat "Connections" and the sultry "Dream Within a Dream," on what is in essence a stylistically homogenous recording.

Gillard champions mood and trio chemistry over striking compositional juxtapositions for the sake of it. In a way, the music is a celebration of the mainstream jazz of the 1950s and 1960s—and its modern acolytes—with blues, balladry and swing the blood swirling in the Gillard's veins. The standard "As Time Goes By" is addressed with caressing reverence until Gillard stretches out, but perhaps owing to the tune's sheer familiarity it lacks the fresh appeal of Gillard's own killing ballad "Light a Candle." Gillard, like Rollins or Branford Marsalis—another influence—is a fine, inventive interpreter of standards, but her own tunes exert a stronger allure, albeit with derivative style.

Ó Lochlainn's grooving ostinato and Lyttle's lithe, rhythmic push-and-pull drive the lively "Between Two Worlds"—underpinning one of Gillard's most expansive improvisations—freewheeling yet ever-melodious. Similar rhythmic elasticity is at the core of the jaunty "Revolving Door"—a feature for Lyttle—while "A Day in El Médano" proves the perfect set-closer, it's striking head, fast-walking bass and swinging trio interplay exude boppish energy, underpinned by a faintly Moorish air.

Gillard can, you feel, boast complete technical control of her horn, though doesn't need to demonstrate the fact every time she solos. There's plenty of fire in Gillard's playing, to be sure, but it's a passion tempered by lyricism and a firm narrative bent, qualities than make Dream Within a Dream a consistently rewarding experience. Hopefully, Gillard will kick on from here and bring her music to the wider audience it deserves.

Gene’s Scene; Connections; Dream Within a Dream; To Remain Nameless; As Time Goes By; Light a Candle; Between Two Worlds; Revolving Doors; a Day in El Médano