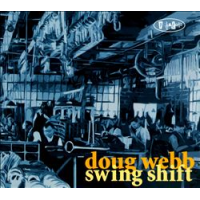 An essential part of jazz fandom is participating in the endless debate about the pros and cons of recordings versus live performances. Despite the obstacles in the pursuit of the holy grail of recorded perfection, such as budget limitations, artistic differences between producers and performers, and the stifling effect of herding musicians into separate cubicles, records give us the opportunity to savor the essence of a performance; after repeated listening, we often make these sounds a part of ourselves. While live shows are frequently subject to encumbrances like noisy patrons and claustrophobic seating arrangements, who among us would forsake the memories of great gigs, the bragging rights that come with catching musicians on a fire-breathing night, or the chance to be a part of the excitement by applauding or offering spontaneous verbal support?

Saxophonist Doug Webb's Swing Shift is a studio session that sounds and feels like a late night club set. Though some of the six-track, 55-minute record bears a resemblance to John Coltrane's early 1960s quartet and includes well trodden material by Mal Waldron, Frank Foster and Rodgers and Hart, there's nothing safe, referential or predictable about it. These recognizable points of reference are a framework for a profoundly present-centered music that—like the greatest live performances—possesses the power to wash away the dust of daily existence.

At the record's core is a rhythmic thrust that is at once nimble, bold and almost unremittingly aggressive. Bassist Stanley Clarke and drummer Gerry Gibbs are one of the fiercest and most focused bass and drums teams in recent memory. They generate their own brand of conventional swing, and manufacture a steely momentum outside the confines of a traditional, steady pulse. There's something primal and dead certain about Clarke's lines, whether he's walking or finding other, more skeletal ways to mark time and outline harmony. The brisk, irregular chatter of Gibbs' snare, as well as frequent bass drum and tom-tom punctuation, offers another layer of rhythmic stimulation that manages to stay on point.

During "Soul Eyes," the disc's opening track, it's impossible to tell who's responsible for the music's steadily rising temperature—Clarke and Gibbs, in cahoots with pianist Larry Goldings, or the leader's muscular, cogent tenor solo. Throughout the permutations of the 22-minute "Patagonia Suite," Clarke and Gibbs (along with pianist Mahesh Balasooriya) aggressively maneuver amidst Webb's tenor and soprano, going inside and outside as the suite evolves. When Webb and Gibbs square off on the all-too-brief "Rizone," they fashion a claustrophobic zone somewhere between ludicrously fast straight-ahead time and free form; the cumulative effect sounds like they're slapping each other silly.

Webb is a smart, effusive and resourceful soloist who finds his own ways of dealing with the melodies and changes of familiar tunes, like "Soul Eyes," "Simone" and "Where Or When." His improvisations exhibit the gritty, uninhibited feel of a jazzman playing for the sake of the music alone, with no other agenda in mind. Webb juggles a variety of phrases of varying lengths, makes brief, interesting digressions, takes into account whatever Clarke and Gibbs throw at him, and never ties things together too neatly. The mastery that comes with ardently playing the horn for decades and taking the standard repertoire seriously runs through these tracks and results in music that is deep, challenging and emotionally satisfying.

As Webb and his bandmates throw their whole selves into every note, playing like there's no tomorrow and caring not one whit about the consequences, you might almost hear an audience's applause and shouts of delight. Swing Shift is a terrific record.

Soul Eyes; Patagonia Suite; Simone; Where Or When; Rizone; Apodemia.