By DAN BILAWSKY
January 4, 2011
Sign in to view read count 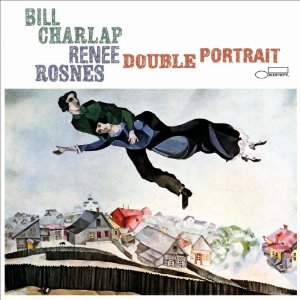 Many people believe that married couples have a telepathic connection. This recording puts that theory to the test, with two of the most important pianists in jazz today—who also happen to be husband and wife—sitting down for a duo piano recital.

Charlap's own work with drummer Kenny Washington and bassist Peter Washington has positioned him as one of the key voices in the piano trio format. His selection of standards and exquisite, classy recording projects have given him status as an arbiter of taste within the jazz world. While these aspects of his playing are Charlap's calling card, Rosnes is often lauded for two very different sides of her personality. Many in the jazz community have appreciated her ability to uphold the traditions of jazz, backing legends like J.J. Johnson, James Moody and Bobby Hutcherson since arriving Stateside in the mid-'80s, while another segment of the jazz listening public revels in her more adventurous exploits on her own recordings and with the SFJAZZ Collective.

Neither pianist compromises their artistic inclinations on Double Portrait, instead merging effortlessly to create a tapestry of refined and tasteful statements. Both players balance a sensitive touch with deeply probing and responsive ideas. Song choices here make sly, joking reference to their personal connection ("Never Will I Marry"), nod toward former Rosnes employers Joe Henderson ("Inner Urge") and Wayne Shorter ("Ana Maria"), and touch on standards ("Dancing In The Dark" and "My Man's Gone Now").

While every track is first-rate, the second half of the program posses greater heat and energy. The album opens with two Latin leaning compositions—Lyle Mays' "Chorinho" and Antonio Carlos Jobim's "Double Rainbow"—and both pianists lock in well together, but don't seem to be completely engaged with the material. This all changes when the pair arrives at "Ana Maria," a nine-minute performance that's almost too short, with both players digging deeper, and exploring the open expanse of Shorter's composition. The duo arrives at a loose and appropriately dark place for "My Man's Gone Now," and they swing as well or better than any sans-rhythm section pair on "Dancing In The Dark." Pent-up intensity is present on their first rate take of "Inner Urge," while Gerry Mulligan's under-performed "Little Glory" is all class.

Charlap and Rosnes deserve all the happiness in the world for finding each other—personally and artistically—and the jazz community gets a little glimpse of this match made in heaven on Double Portrait.