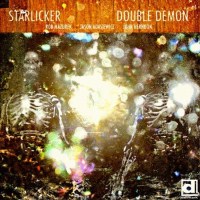 Since the turn of the Millennium, cornetist Rob Mazurek has been one of the most intrepid explorers in the field of electro-acoustic jazz improvisation. From the seminal efforts of his flagship collective, the Chicago Underground (Chicago Underground Duo to Orchestra), to recent endeavors like Exploding Star Orchestra, Mandarin Movie and his own self-titled Quintet, all of Mazurek's projects have featured computerized and/or electronic sound manipulation as a key element—which makes his most recent venture, the acoustic trio Starlicker, all the more intriguing.

Starlicker features two of Chicago's finest improvisers, ubiquitous vibraphonist Jason Adasiewicz and renowned Tortoise drummer John Herndon, both charter members of Exploding Star Orchestra and Mazurek's Quintet. This bass-less reconfiguration of the Quintet inverts the group's relationship towards traditional trio dynamics, as Mazurek states in the liner notes, "Instead of using the fixed or unfixed bass sound as the grounding force in the music, we are attempting to create a grounding from the resonances of the harmonics from the top down." Reveling in the massed sonorities derived from radiant cornet, kaleidoscopic vibraphone and scintillating trap set, Mazurek and company travel the spaceways—unamplified—on their debut studio recording, Double Demon, eliciting a prismatic spectrum of celestial vibrations that transcend the boundaries between electric and acoustic wavelengths.

The trio's three-way dialogues strive towards a collective ideal; Herndon's bustling polyrhythms generate a roiling undercurrent of ceaseless forward momentum while Mazurek and Adasiewicz weave a reverberant harmonic foundation, alternating between variegated motifs and probing solos. Throughout the date, Mazurek's stratospheric testimonials, Adasiewicz's luminescent cascades and Herndon's syncopated downbeats surge with a thrilling physicality of sound that favors coruscating expressionism over muted introspection. At their most ecstatic, dense thickets of collective improvisation ascend to blissful rapture, buoyed by the lyrical character of Mazurek's anthem-like themes. Only the spacey prelude to "Vodou Cinque" and the ethereal introduction of "Triple Hex" offer serene respite.

In Mazurek's own words, "Starlicker is about reaching with your tongue to taste, take chances, to attempt to find something else in the far reaches of inner and outer space." Double Demon evokes the boldness of the trio's moniker with a barrage of stirring melodies underscored by hypnotic grooves and animated group interplay, making this session one of Mazurek's most compelling small combo releases to date.