Joe McPhee Survival Unit I I I: Don't Postpone Joy! 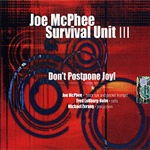 This 2007 release for the Italy-based Tracce label presents saxophonist/trumpeter Joe McPhee's Survival Unit III improvisation group, which signifies the final moniker for the trio that was originally called The Alto Trio. The origination of the core trio, known as Survival Unit I, came to fruition during the '60s, sparked by themes centered upon social injustices and the Vietnam War.

Captured live during the Italian Tradizione Jazz Festival in Movimento, McPhee and his comrades generate gobs of expressionism, somewhat based upon man's disregard for the planet and our futuristic concerns. And that's partly what free jazz improvisation is all about, since the musicians mimic the tensions of life via their instruments and by collaborating with their peers. Think of protest music articulated through progressive jazz and improvisational slants, evidenced here by the artists' aggressive stance, where the music tends to insinuate and then stimulate.

With percussionist Michael Zerang's asymmetrical rhythmic support, the backbone is framed for McPhee's pocket trumpet and tenor sax work, while cellist Fred Lonberg-Holm buoyantly handles the bottom-end while serving as a foil for the leader. Marked by the artists' outbursts and expansion mechanisms, they generate a vacillating group-centric persona, shaded by multi-hued dialogues and changeable trajectories.

McPhee toggles between tenor sax and pocket trumpet atop Lonberg-Holm's nimble pizzicato notes and streaming arco phraseology. During 27-minute opener, "Variations on Harriet," the band renders a rolling wave of highs and lows amid a few introspective passages featuring notions of lament. In a sense, they parallel the human element while conveying whirlwind-like havoc in concert with fiery exchanges and snaking passageways. Yet McPhee, performing on tenor sax, finalizes the piece with a teardrop of sorts.

On "Variations on Nation Time," McPhee's sinuous sax pronouncement shares the same tonal plane with Lonberg-Holm's upper register as the duo engages in a mode akin to sportsmen locking into a fierce competition. But they alter the tide a bit on the fourth and final piece, "Variations on Remembrance," which commences as an avant-blues before veering off into angular discourses, heartily emphasized by Zerang's booming drum patterns.

We're all survivors, and perhaps the message here is that we need to get our individual voices heard and not become reticent when matters go awry. McPhee and his band mates execute a spiritual cleansing process, teeming with vivid dialogues and multilayered textures. An eventful and undeniably persuasive listening experience it is.