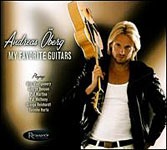 Swedish guitarist Andreas Oberg's My Favorite Guitars is that rare thing among jazz albums: a wolf in sheep's clothing. As the title suggests, Oberg concentrates here on the songs of his major influences (probably the most prominent among them is Pat Martino, and to a lesser extent Django Reinhardt). And throughout the disc's twelve tracks, the guitarist plays over such a plush bed of synthesized strings and rich production, that at times one might lose sight of the raw materials of his solos.

A word to the wise: don't let that happen, and don't forget about Andreas Oberg. Looking closely at his improvisations on these tracks, one sees a truly fine-tuned technical facility. His tone is rich, with occasional moments of Wes Montgomery on ballads like Toninho Horta's "Waiting for Angela." But on the up-tempo bebop crush of "The Trick Bag," he loses none of his sound quality in achieving an accessible yet wonderfully shaped solo. On "Uptown Down" as well, he plays a glib, giddy improvisation that is as technically adept as it is fun to hear.

Oberg isn't the only one to be found playing his heart out. On that same song, Tamir Hendelman's two-handed unison lines on the piano channel slivers of Oscar Peterson and build to a visceral thrill. Marian Petrescu's piano solo on the original "AM Call" drives away from the pop sensibilities of the rhythm section into an electric rush of high, blitzing lines.

For his first American release, it is understandable that a young guitarist would want to reach a wide audience, and it makes sense that a popular, over-orchestrated sound of digital strings would do the trick. But even in such a studio setting, Oberg's playing shines through as a diamond in the smooth-jazz rough. If his future ventures draw him to greater harmonic complexity while he nurtures simpler, honest instrumentations and arrangements, his greatest strengths will be increasingly evident.