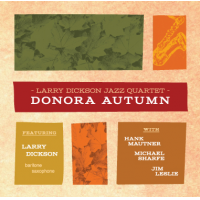 Baritone sax, trumpet, bass and drums: a lineup that may seem more than passably familiar to fans of small-group jazz in general and West Coast jazz in particular. The first of many piano-less quartets—and the one that remains the gold standard— was the Gerry Mulligan / Chet Baker Quartet, formed in the early '50s with Bob Whitlock on bass and Chico Hamilton on drums. While Cincinnati-based baritone Larry Dickson's roster is the same, there is no attempt on Donora Autumn to replicate the sound and spirit of the Mulligan / Baker ensemble, nor should there be—even though there are random traces of Jeru in Dickson's broad-shouldered baritone and Baker in Hank Mautner's expressive trumpet and flugelhorn.

For his third salute to the changing seasons (following Second Springtime and Summergold Promises), Dickson has chosen five of his own compositions, Thad Jones' well-grooved "Three and One," the standards "Autumn Leaves" and "Laura," and one of the loveliest seldom-heard tunes ever written, Lionel Newman / Dorcas Cochran's "Again," from an all-but-forgotten 1948 film noir, Roadhouse, which starred Ida Lupino (who introduced "One for My Baby" in that same film), Cornel Wilde and Richard Widmark. Oh, and there's one song by Mulligan, "Out Back of the Barn," whose devil-may-care down-home vibe is hardly typical of his cool West Coast persona.

Dickson wrote the cleverly named "Yes, We Have No Piano" (and, presumably, no bananas), the carefree samba "Rocket Surgeon," an earnest "Letter to Lars" (as in Gullin, the peerless Swedish baritone), "Iron Nori" (for his friend, the late trumpeter Al Nori) and "Born on Third," which, he writes, "refers to those privileged people who were born on third base and went through their whole lives thinking they'd hit a triple." David Raksin / Johnny Mercer's enduring standard, "Laura," played as a bossa, is a showcase for Mautner's flugelhorn, "Again" the same for Dickson's baritone. Besides comprising a stalwart rhythm section, bassist Michael Sharfe and drummer Jim Leslie map out engaging solos whenever the chance presents itself.

Although its implicit purpose is to depict a Donora Autumn (Donora, by the way, refers to the street on which Dickson lives, not the Pennsylvania home of baseball legend Stan Musial), this bright and buoyant session may be shared and admired during any season of the year.

Yes, We Have No Piano; Rocket Surgeon; Again; Three and One; Autumn Leaves; Letter to Lars; Iron Nori; Laura; Out Back of the Barn; Born on Third.