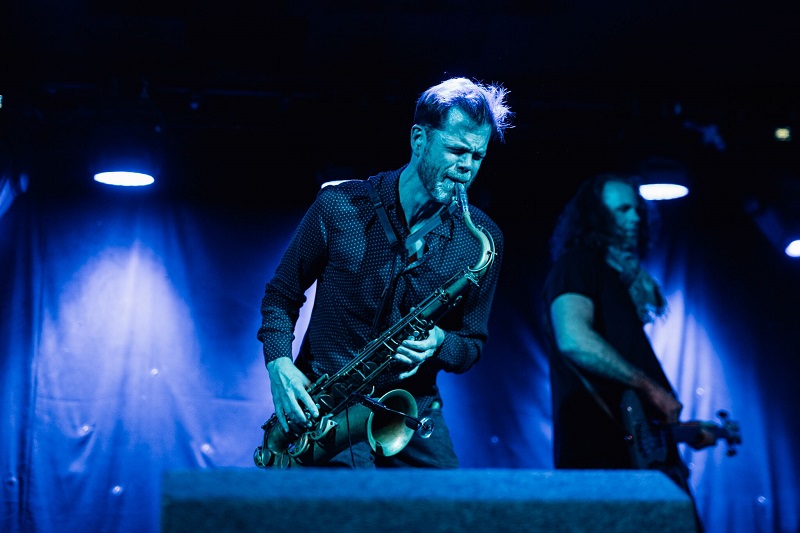 "Are you here because of Bowie or for jazz?" a woman asked those around her in the queue for Donny McCaslin's gig—part of the Belfast International Arts Festival. The answer, by and large, was both.

McCaslin's current group will likely always be remembered—and no doubt billed for some time to come—as David Bowie's backing band on Black Star (2016)—the singer's last studio recording, which also inspired in significant part McCaslin's striking Beyond Now (Motema, 2016). Yet there's a lot more to McCaslin's thirty-year career. Beginning with a four-year stint in Gary Burton's late 1980s band, McCaslin's journey has been signposted by high-calibre collaborations with the likes of Maria Schneider, Steps Ahead, David Binney and Antonio Sanchez, not to mention a dozen albums under his own name.

A couple of new songs, untitled as yet, revealed contrasting sides of McCaslin as composer. The first, built upon the tenor player's strikingly melodic foundations, morphed into robust synth-pop, underpinned by Lefebvre's steadily driving bass grooves and Danziger's mesmerizing patterns—a sophisticated hybrid of drum 'n' bass, electronica-influenced rhythms and beyond. For this European tour McCaslin is rotating the drum chair from gig to gig between Danziger, Mark Guiliana and Arthur Hnatek. Giuliana and Hinatek will doubtless bring their own personalities to the group dynamic but it's hard to imagine they'll bring anything more than Danziger, whose tremendous work rate was matched by his inventiveness.

Another tune being road-tested was a vehicle for Lindner, who switched between upright piano and electric keys to conjure multiple textures. His jangling acoustic atmospherics and probing electronic rhythms steered the narrative of this slower number, with McCaslin lending plaintive tenor colourings. Lindner has been a key element in McCaslin's exploration of electronic soundscapes since Casting for Gravity (Greenleaf Music, 2012), arguably pushing the saxophonist into more experimental areas. Here, the two combined in powerful overlapping waves, with an array of modulators morphing the sounds to conjure vast, spacey canvases.

McCaslin was equally compelling in a more traditional, acoustic mode, his slippery glissandi and vertiginous escalations, crowned by piercing notes, whipping up the crowd. Yet for all the—intermittent—displays of individual virtuosity this was very much an ensemble tour de force. Whether locked in head-bopping futuristic funk, blazing contemporary jazz- rock, or knotty DJ-esque grooves, the real heights were scaled together as a collective.

An instrumental version of Bowie's "Lazarus" was the only overt tribute to the late singer, McCaslin's soaring tenor at the epicentre of this stirring anthem. The final number encapsulated a little of all the groups threads in a heady brew of melody, pedal-skewed sonics, barrelling tenor and driving beats. Over Lindner's simple keys mantra Danziger unleashed a pummelling solo, McCaslin slipping in to ratchet up the tension in a thrilling finale—an emphatic ending that negated the need for an encore.

With McCaslin's live set already looking towards the next release there could be no charge of resting on laurels. Nu jazz? Jazztronica? The labels don't quite stick to McCaslin's music, which as this stonking Belfast set illustrated, transcends categories whilst providing a tantalizing sonic augury for music yet to come.