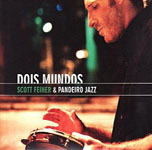 What has native New Yorker and former guitarist Scott Feiner been doing in Rio de Janeiro since 2001? He's been playing the tambourine-like pandeiro, developing it as a viable jazz instrument, leading an ensemble—and effectively creating a music—he calls Pandeiro Jazz. In this unique idiom, the handheld pandeiro replaces the drums and yields a sound that is texturally spare, yet surprisingly full. The style is an unforced hybrid, marrying a Brazilian aesthetic to the kind of straight-ahead American jazz Feiner pursued as a guitarist-bandleader at Augie's and other clubs in the mid '90s.

Pandeiro Jazz (Delira Music), Feiner's 2006 debut as a pandeirista, featured New York A-listers Freddie Bryant, Joel Frahm and Joe Martin. There were streamlined, Brazilian-influenced treatments of music by Horace Silver, John Coltrane and Wayne Shorter, along with two Feiner originals. On Dois Mundos, the follow-up, American jazz repertoire ("Monk's Dream," "All of You") still plays a role, but Feiner is more assertive as a composer; five of the nine pieces are his and they're plenty strong enough to carry the program along. Also, the guitar-based, street-band flavor of the earlier disc gives way to a bigger sound and the players this time are Feiner's Brazilian colleagues: David Feldman (piano), Jesse Sadoc (trumpet), Marcelo Martins (saxophones) and Alberto Continentino (bass).

As small as it is, the pandeiro has a remarkable bass response, blending nicely with Feldman's piano on two pared-down duo tracks. Sadoc's muted colors on "Retrato em Branco e Preto" ("Portrait in Black and White") are a beautiful detail, but a bigger surprise is Feiner's decision to set this Jobim standard in quick waltz time, compressing the melody. It's the opposite of his approach to "All of You," which is stretched out and slower than usual. Concluding with "Under the Influence," a Brazilian boogaloo minor blues with classic Blue Note written all over it, Feiner gets to the heart of his in-betweenness, blending the sound worlds of New York and Rio in an instant.