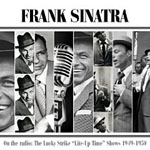 With its recently launched Premier Collection, British outfit Acrobat Music makes a strong case for the title of Best Up-and-Coming Label. Along with rare radio sessions by Dave Brubeck, Sarah Vaughan, the classic Miles Davis Quintet and more, one of the highlights of the series has to be an unearthed gem from none other than Frank Sinatra. On the Radio: The Lucky Strike "Lite-Up Time" Shows 1949-1950 compiles a series of nightly broadcasts Sinatra recorded for CBS, with heavy 'promotional consideration,' of course, from those cigarettes inhaled one after the other in so many of Mickey Spillane's Mike Hammer stories.

These cuts don't provide the been-there, seen-it-all Chairman of the Board that would one day pack The Sands where he would lament about his "very good years." These are the good years. Sinatra here was already a superstar, albeit more of the teen-beat variety, as can be heard throughout on the audience track; it consists of nothing more than screaming, young girls.

The exhaustive On the Radio delivers 18 different songs—the same ones he would both lay down in the recording studio on the same day he played these sessions and with which he would serenade audiences that same night in New York and Hollywood nightclubs. The wonderfully comprehensive liner notes state that this material presents a snapshot of Sinatra in perhaps his most exhausted state. Later in 1950 he would suffer the famed throat hemorrhage that would threaten to end prematurely the career of one of the greatest entertainers of all time.

Any exhaustion is hardly detectable, though, as Sinatra sounds as unique and professional as ever, especially on swingers he would carry far into his golden years such as "You Do Something to Me" and "I've Got a Crush on You." Sinatra also shines on ballads, the highlight being "Body and Soul," where he is accompanied by trumpeter Bobby Hackett. You shouldn't pick this one up, however, if you're seeking out essential versions of all those old standards. The real draw here is being able to close your eyes and imagine coming home after work, firing up a tasty Lucky Strike (this is required, of course), mixing a Rob Roy and tuning in to hear Old Blue Eyes do what he does best before he even hit his prime.

Introduction And Theme: The Best Things In Life Are Free; You Do Something To Me; I Only Have Eyes For You; All Of Me; Maybe It's Because; Some Enchanted Evening; Look What You've Done To My Heart; There's Yes Yes In Your Eyes; Every Time I Meet You; You're Breaking My Heart; I've Got A Crush On You; It All Depends On You; A Man Wrote A Song; A Little Bit Of Heaven; Don'cha Go 'Way Mad; It Isn't Fair; Body & Soul; Closing And Theme: Put Your Dreams Away For Another Day.