Home » Jazz Articles » Bryant / Fabian / Marsalis: Do For You?

Bryant / Fabian / Marsalis: Do For You?

By Roger Farbey
August 5, 2017
Sign in to view read count 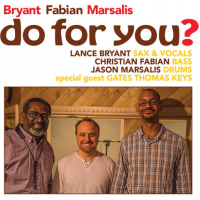 Lance Bryant and Christian Fabian (both alumni of Berklee College) met when playing in the Lionel Hampton Big Band. Jason Marsalis, a younger member of the famous jazz dynasty, subsequently joined the Hampton band to replace its late leader on vibes. There are several strands to this intriguing recording. The blues is overtly featured in the opener "Five Minute Blues" characterised by Bryant's big toned tenor and his bluesy style pervades many of the numbers sharing a similar sensibility to the genre with Ornette Coleman although stylistically he's nearer to a breezier semblance of Albert Ayler, check out the meandering "Moxie Inside."

Bryant also displays his vocal talents on his own composition, the blues imbued "Of A Certain Age" and Antonio Carlos Jobim's "If You Never Come To Me" where the trio is augmented by Gates Thomas on keyboards. Christian Fabian's virtuosic bass playing is highlighted on the title track and the curiously titled "Resolvence of the Old" both his own compositions. Marsalis is no slouch on drums and can be heard to great effect energetically propelling Bryant's "The Cat Hatter," and Victor Lewis's fast-paced "Hey It's Me You're Talking To."

Whilst the somewhat diffident album title and its facile-sounding opening track may give a slightly misleading picture of the overall contents of the album, there's no question that this is fine contemporary jazz, comprising mostly original compositions and performed by three highly talented musicians.

Five Minute Blues; Never Again; Of A Certain Age; The Cat Hatter; Do For You?; If You Never Come To Me; Resolvence of the Old; Weather Forecast; Moxie Inside; Hey It’s Me You’re Talking To.