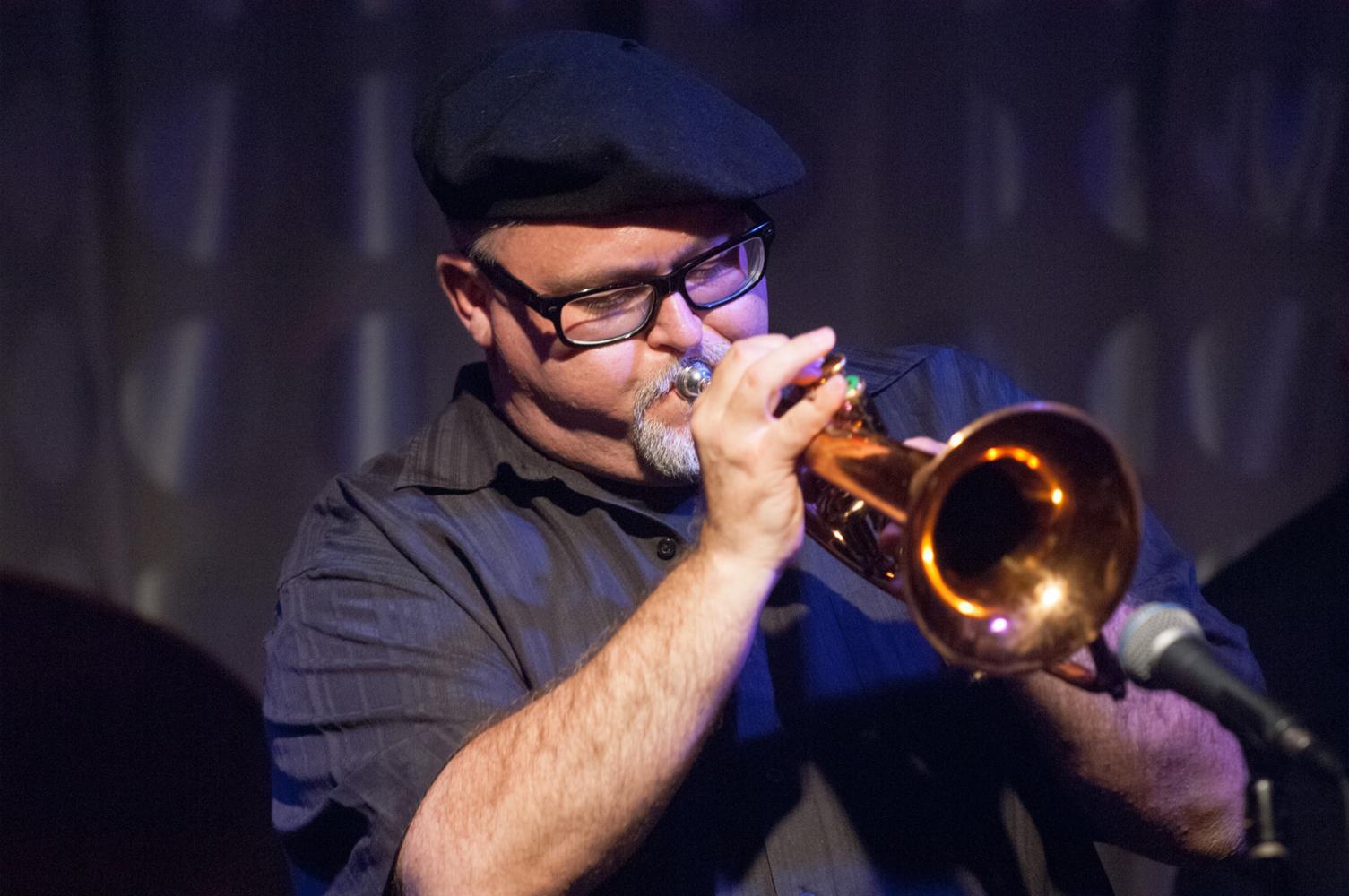 By DAVID BECKER
September 1, 2016
Sign in to view read count

It goes beyond just a preference; to me, it's my voice. Once I started playing the flugelhorn, the trumpet would just sit there and gather dust. &#151Dmitri Matheny

The flugelhorn can be a difficult mistress. Players may find themselves endlessly explaining the differences between their axe and the trumpet, why their instrument seldom sounds like Miles Davis in a bad mood and why most horn players treat it as a specialty tool. But when someone with the authority of bebop legend and flugelhorn champion Art Farmer, tells you stick with something, you tend to listen.

Dmitri Matheny, one of Farmer's last private students and his most prominent protégé, has been doggedly pursuing the master's vision over the past few decades, playing flugelhorn and nothing but for hundreds of concert dates each year, plus clinics, classes, film work and a series of albums that have explored passions ranging from sacred music (Spiritu Sanctu, Papillon, 2007) to hard-boiled crime movies (Jazz Noir, Papillon/Blueport Jazz, 2016).

All About Jazz: I hate to start out with something you probably get asked all the time, but why the flugelhorn exclusively?

Dmitri Matheny: Actually, the question I get asked all the time is if I'm related to Pat Metheny. The flugelhorn—I just love it so much. I love the feel of it, the sound, the timbre, the fact it's more lyrical. And it goes beyond just a preference; to me, it's my voice. Once I started playing the flugelhorn, the trumpet would just sit there and gather dust.

A lot of trumpet players will only bring it out on a ballad, something low-key. But I like it always, even on a bright, lively up-tempo number. Clark Terry proved the flugelhorn can be very versatile.

AAJ: Does it impose any limitations? Do you get to do the "angry young man with a horn" thing, for instance?

AAJ: Can you run the voodoo down with a flugelhorn?

AAJ: You play a horn you inherited from Art Farmer. Do you do anything special to keep it in shape?

DM: It's a strange hybrid. This one was put together for him by a guy in LA called Zigmant Kanstul... who was kind of a mad scientist who liked to experiment. The two of them cooked up this idea to use the valves he liked from one horn, the lead pipes from another and the bell from another. They basically put together this Frankenstein monster of a flugelhorn that I now play.

What they came up with is something with a really rich, beautiful tone, but it has a lot of strange intonation issues. It's hard to play it in tune. It's not just pick up and play... I keep it clean and pay attention to the valves. I had a little body work done recently just to take some dings out and improve the intonation.

AAJ: When somebody asks you what you do, do you ever say "I play trumpet" just to keep it simple?

It's kind of frustrating to me on a fundamental level that it's not known more as a lead instrument. People think of it as a double for the trumpet. It's a bigger instrument, you have to fill it with more air. To my ear, it's just a better sound... Flugelhorn is to the trumpet like the viola is to the violin. The violinists get all the love, but the viola players really expand the sound.

AAJ: Jazz Noir is a great trip into the world of hard-boiled crime movies and fiction—what inspired the album?

DM: Truth be told, I grew up in the 1970s watching detective series like McMillan and Wife and Columbo. One of my earliest memories of falling in love with music was listening to the studio orchestras for those shows. I just binge-watched a whole lot of Columbo, and those studio orchestras did fantastic work... A lot of it has one foot in chamber music and one foot in jazz, and it's so evocative and moody.

Only recently have I gotten into actual film noir, Bernard Hermann and those guys, so I came at it in kind of a backward way. The basic idea is to conjure images in the mind of the listener... and as an excuse to play all the great melodies.

AAJ: One of the new things for you with this album was crowdfunding (via Indiegogo). How did that work for you?

DM: It worked great. I'll be honest, I put it off for a long time. When people first started doing Kickstarter and these other crowdfunding sites, everybody jumped on it and your inbox would just be full of pitches from everyone you know who does anything creative... I watched my friends do these things, and it would be wonderful when they had success. but I also saw friends who I thought were very popular and they just couldn't get their campaign off the ground. It occurred to me if I was thinking that, then absolutely people in the industry were, too

AAJ: It does make it very public.

DM: You're so naked. If I do one of these campaigns and it doesn't succeed... everybody I know is going to know whether it succeeds or fails. So there were many times I had projects where I considered crowdfunding, and I just couldn't do it.

Then I finally had all this material I had been working on and I really wanted to do this recording and I didn't have the funding, so I just went for it. It really succeeded beyond my expectations. It was a modest campaign, only $10,000- -but at $25 or $50 a pop that's a lot of people.

The funny thing is that if I had written down before I started who I thought would come through, I would have been dead wrong. There were people I never thought were really in my corner who really came through. It was one of the cool side benefits of doing it that way... really finding out who my supporters are.

AAJ: You've got so many plates on the table—lots of touring, classes and seminars, a holiday show for kids, film work. Did you realize early on that music has to be a business, too?

DM: Yes, and I realized that the hard way. I'm about to graduate from Berklee, it's 1989, and I have no idea how to make a living. I've already got a band and we're working all the time, but I'm not making enough money to pay my rent.

So I basically took a bunch of low-paying jobs to learn my way around. I worked for a publicist for a while, I worked for a radio station, I did some grant-writing for non-profits, I worked for a record company... because I wanted to understand how things really work. Everything from how you negotiate a contract to how you get a bass on an airplane.

Probably the biggest thing I learned is that in the arts, there's nothing you can do that's going to make a lot of money... so you come up with several things you can do, and each one of them brings in a little money, and you put them together and you have a life.

AAJ: Lately that model seems to involve a lot of touring for you.

DM: We are 200 nights a year on the road, probably doing a hundred workshops at college and high school. The performances are almost all one-nighters, and that's got to change. Living out of suitcase like that is a young man's game.

DM: The thing I'm working on now is a Chet Baker songbook. A while ago, somebody asked me to do a Chet Baker concert. I love Chet, I have these favorites I've been playing forever. But just on a lark I decided to ask a bunch of other people what their favorite Chet Baker tune was, and I got back all of these suggestions for music I'd never heard. I had this idea of Chet Baker based on the stuff he did with Gerry Mulligan and a few of his popular recordings in the late 1950s, early '60s, but there's all this stuff from the '70s and '80s I didn't know about. So know I've got this set of 80 songs that really cover his whole life and career.

The other thing about Chet is that if you read his autobiographical writing and biographies of him, its 95 percent about his (drug) habit... And that gets really, really boring after a while. Chet did some amazing things, he made some great music, and that's what I'm focusing on. I don't know if it's going to be a recording or what, but that's what really has my attention now.

AAJ: You're not thinking one-man show, are you?

DM: (Laughs) No, that ship has sailed. I'd need to lose weight, get a wig and some Bryclreem... I'm kind of at this tender age—too young to be cowboy Chet, too old to be young and beautiful Chet.