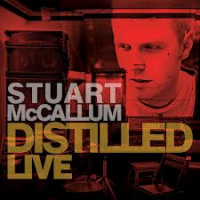 Emerging from the interzone inhabited by post-Pat Metheny guitar jazz, electronica, minimalism and ambient, Manchester guitarist Stuart McCallum's music combines the lush, the layered and the looped with real-time emotional engagement and vigor. Made with a large ensemble including acoustic string and woodwind sections alongside the electronica, Distilled Live sounds rather like an orchestrated version of Steve Reich's shimmeringly beautiful "Electric Counterpoint," written for Metheny and recorded by him in 1987 (and also available in a brilliantly articulated concert recording by London guitarist James Woodrow). Reich's pre-digital age piece combined 14 tape-recorded electric guitars with a live player, an approach which McCallum follows here in extended form and over a broader sonic canvas.

Distilled Live is a live recording of McCallum's 2011 Naim debut, Distilled, woven together from a 2011/12 European tour. The orchestrations, instrumentation and personnel have been tweaked, the running order of the tunes has been altered, a couple of the studio tracks are not performed, and the disc includes three previously unrecorded tunes. The original recording's whammy remains intact, as does the nucleus of the group: McCallum on guitars, effects and samples, Dave Walsh on drums, Chris Manis on percussion, Robin Mullarkey on bass (on most tracks) and Rachel Gladwin—a key member of the Mancunian astral jazz groups led by trumpeter Matthew Halsall and saxophonist Nat Birchall—on harp.

Distilled was a vibrant, magical album, and so is Distilled Live. Each complements rather than replicates the other, and each would serve well as an introduction to McCallum and the "Distilled" suite.

To strike gold on the new set, however, an uncharacteristically lumpen opener must first be negotiated, the previously unrecorded "What Is Beauty?." Here, McCallum includes extracts from recordings made by Indian philosopher/guru Jiddu Krishnamurti, who McCallum cites as one of his inspirations. Think Alice Coltrane and her guru, Swami Satchidananda's vocal contributions to "A Love Supreme" on the pianist/harpist's 1972 album World Galaxy (Impulse!). Forty years on and the device works no better. Like Coltrane's music, McCallum's is at its most effective on a non-rational level and gnomic sound bites, however well intentioned, are inhibiting rather than liberating.