BY DAVID ADLER
September 5, 2009
Sign in to view read count 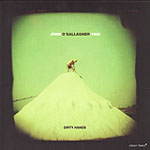 Saxophonist John O'Gallagher and bassist Masa Kamaguchi have a history. They documented their intense, ruminative interplay on O'Gallagher's two-volume CIMP session of 2004, Rules of Invisibility, featuring Jay Rosen on drums. Dirty Hands, recorded in Portugal during a 2007 European tour, is a continuation of that history, although this time we hear the leader and Kamaguchi with veteran drummer Jeff Williams, who has lent much textural acuity to Axiom, O'Gallagher's burning double-sax quartet.

Rules found O'Gallagher playing both alto and soprano and CIMP's famously minimalist recording method suited him well, giving the horns a certain roundness and warmth. Dirty Hands On Rules, O'Gallagher took a left-of-center approach to bebop and post-bop; on Dirty Hands, the music is freer and less overtly swing-based, although Williams' loping "Borderline" establishes a clear tempo midway through the set. O'Gallagher's pieces—"Bed Bugs," "Time Finds Its Way," "F Line"—start with short precomposed ideas that then grow outward into abstraction and dialogue. Three of seven tracks are credited to the full trio, including the 16-minute finale "Lessons of History."

There's an impressive weight to Kamaguchi's tone, an unmistakable command of trio discipline that's also evident in the bassist's work with Frank Kimbrough and Paul Motian on the pianist's Play (Palmetto, 2006). O'Gallagher endows his brisk and compelling alto language with individuality but also a sense of living history: one thinks of Ornette Coleman's Golden Circle (Blue Note, 1963) recordings, with hints of Steve Coleman's or Greg Osby's jagged in-the-pocket articulation and perhaps something of Tim Berne's uncaged roar.