Different Every Time: The Authorised Biography of Robert Wyatt 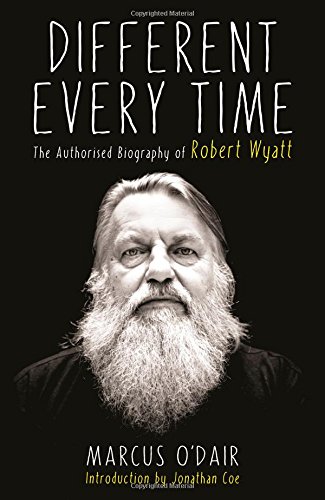 For all his self-effacing personality (on first meeting saxophonist Gilad Atzmon he described himself as an amateur musician) Robert Wyatt is an intelligent and extraordinarily talented musician, singer and composer. Introduced to jazz by his father, Wyatt was forever committed to the genre but, as his story unfolds his taste in music was, and is, highly eclectic, which goes some way to explain the unique music he creates. Just like his late friend, the DJ John Peel, he listened without prejudice. Wyatt was given drum lessons as a teenager by jazz drummer George Neidorf. Wyatt had already taken violin, followed by trumpet lessons but "didn't take" to paraphrase Woody Allen. These instruments however did make a re-appearance later in his career.

Armed with exceptional drumming ability, Wyatt co-founded Soft Machine with friends from his local grammar school (Hugh Hopper and Mike Ratledge) but within the space of four albums he had departed in a rancorous split. Hugh Hopper was quoted as saying "Robert was definitely pushed out of what he felt was his own group." But the drummer, who also sang in a high, plaintive voice, was not defeated and quickly assembled his own band Matching Mole. Sadly it only lasted for two albums and then on 1 June 1973 Wyatt suffered his tragic accident. Falling from a window at a party, he broke his back, rendering him a wheelchair-bound paraplegic.

Despite this life-changing episode, his musical life continued to flourish, aided and abetted by his wife and companion, the artist Alfreda Benge, who also became his shrewd business manager and musical collaborator, contributing cover art and lyrics to many of his albums. Ironically, the music that Wyatt has produced since his accident has reached wider audiences and achieved higher critical acclaim than even the first four much-vaunted Soft Machine recordings. Using his plangent, affecting vocals as his primary instrument, he also deployed hand percussion, keyboards, cornet and even the odd squeal of violin to create his idiosyncratic songs. These skills combined, with his highly imaginative and often politically charged compositions, made his music remarkable.

O'Dair traces Wyatt's career chronologically in chapter headings corresponding with successive key events, songs or albums. The book predominantly deals with the musical side of Wyatt's life, but occasionally offers glimpses into his personal triumphs and tribulations such as his eventual successful defeat of alcohol dependency, his erstwhile "muse."

Suffering from sporadic bouts of depression, Wyatt underwent a fallow three year period during the late 1970s when he virtually never entered a recording studio. It took his friend Carla Bley to snap him out of this inertia with the classic admonishment: "Come on, who do you think you are? Some fucking pop star? You've never had a hit record, you're not good-looking enough. You're just a musician like the rest of us, so get on with it!"

Not one to pay mere lip service to his political beliefs, Wyatt was for many years an active supporter of the Communist Party of Great Britain but though now no longer a member he continues to be "left-on" in his views. Ironically, Wyatt achieved far more singles success as a solo singer, than did the Hendrix tour-supporting Soft Machine. He memorably covered Neil Diamond's "I'm a Believer," which saw Wyatt miming from a wheelchair on Top of the Pops and with the help of lyrics by Elvis Costello and music by Clive Langer, hit the UK's top 40 charts with "Shipbuilding," on its second release. But Wyatt is undoubtedly an albums man, and has produced some truly excellent ones over the past 40 years including Rock Bottom, Old Rottenhat and the Mercury Prize nominated Cuckooland.

Chapter by chapter, O'Dair's book does nothing less than immediately inspire the reader to listen to Wyatt's music. Wyatt also helped compile an accompanying CD of selected tracks spanning his long career, but maybe listening to his entire back catalogue would be a better bet, since his music is so characteristically diverse. This is an extremely well-written and well-researched book on the genius that is Robert Wyatt and would be appreciated by any serious music fan. At the ripe old age of 70, Wyatt may not be a "fucking pop star" but is certainly a brilliant, visionary musician.