By Dan Bilawsky
February 26, 2016
Sign in to view read count 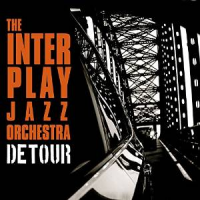 Making a big band album is no easy feat, what with the organizational aspects, the musical demands, and the costs associated with such a venture. But as difficult as all of that may be to deal with, the real trick is in sustaining and developing this type of ensemble. Extrinsic benefits for participation are few, as many such groups make little to no money and receive few bookings, but the intrinsic rewards, thankfully, are many. Anybody who's ever encountered the full throttle swing of a big band or occupied a chair in such an ensemble is fully aware that there's no substitute for that type of sound. That's why we're fortunate to have groups like The Interplay Jazz Orchestra, a Long Island-based big band that soldiers on despite existing in a somewhat inhospitable environment for its kind.

This outfit, originally taking shape as the Hofstra University Alumni Big Band back in 2003 and evolving into its current state over time, celebrated ten years of existence with the release of its debut—My Love You're Free (Self Produced, 2013). Since that point, the orchestra, under the direction of trumpeter Gary Henderson and trombonist Joey Devassy, has maintained its identity, kept its personnel steady, expanded its book, and played just enough to keep everything lubricated and running smoothly. And now this tight assemblage comes roaring back with Detour—a sophomore statement that's even more memorable than the group's debut.

The Interplay Jazz Orchestra hits every item on the big band checklist at some point in this program. Latin grooves, bright swing, balladry, mellow strolls, and rock-funk inflections are all part of the package. In some instances, more than one of those ideals are melded together in a single performance, but plenty of numbers focus in on a single concept. The album opens on "Puesta Del Sol," a hot Latin original from baritone saxophonist Chris Scarnato. It's a piece that benefits from Andrew Gould's fluid alto work and trumpeter Damian Pacheco's spicy statements while also shining a spot light on the rhythm section and the band as a whole. Two sides of the swing coin follow. Scarnato's "Detour" swings hard and delivers a noteworthy soli statement from the saxophone section while Devassy's "Serendipitous" takes a more relaxed, Basie-ish approach. Then there's "Not Enough," a number that bridges the funk-disco-jazz divide with mixed results; Henderson's arrangement of Dexter Gordon's "Soy Califa," delivering oomph, sleek contoured Latin-ish insinuations, and swing in equal parts; and the immortal "Body And Soul," which finds tenor saxophonist Alejandro Aviles in the driver's seat.

The balance of the program includes Henderson's lively "Close Quarters," a hip redesign of Sonny Rollins' "Alfie Theme" from trombonist Brent Chiarello and Andrea Gonnella, guitarist Chris Doherty's spry "First Timer," and an appropriately deep take on trombonist J.J. Johnson's "Lament" arranged by Devassy. Then it all comes to an end with a tune from the man who started it all for this band—pianist Dave Lalama, the head of the jazz program at Hofstra University. His "[email protected]," a hot and bluesy swinger with plenty of solo space, closes the album in fine fashion. The Interplay Jazz Orchestra already had it together on its debut, but it completely outdoes itself with Detour.