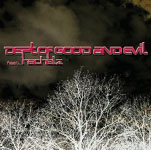 Pianist Rachel Z revisits her successful deconstruction of (largely) contemporary tunes on Everlasting (Tone Center, 2004) with Dept of Good and Evil. This time, however, the trio's more collaborative nature has compelled Z to release the music under a collective group name, Dept of Good and Evil.

There's a stronger balance struck between contemporary material, original material written by Z (alone or in collaboration with drummer/producer Bobbie Rae) and material from the repertoires of saxophonists Wayne Shorter and Joe Henderson. Recorded after a 2006 100-date tour, Dept of Good and Evil is an unequivocally mainstream jazz record, despite where it finds its material.

Once again Z lays waste to the claim that contemporary pop songs lack substance by covering material from well-known groups including The Police ("King of Pain ) and Joy Division ("Love Will Tear Us Apart) as well as lesser-known indie bands Death Cab For Cutie ("Soul Meets Body ) and Yeah Yeah Yeah ("Maps ). Even '80s neo-psychedelic rockers The Church ("Milky Way ) are covered, making Dept of Good and Evil an album that reveals the breadth of the trio's musical interests, something that will come as no surprise given Z's work with artists as seemingly disparate as Shorter, Marc Antoine and Peter Gabriel.

Those who don't know the material will be hard-pressed to draw any direct connections to its pop sources. Z is rooted in the darker and more abstract harmonic approach of both Shorter and pianist Herbie Hancock, going so far as to call herself the "evil of the group's title, while the perpetually in-the-pocket Rae and Royce are the "good. The trio swings hard on "Soul Meets Body and adopts a lighter, brush-driven stance on "Milky Way. The group's modal take on "Love Will Tear Us Apart, one of five tracks to also feature guest trumpeter Erik Naslund, buries the familiar melody in so radical a harmonization that it's nearly unrecognizable. "King of Pain is a little more familiar, though it's not after a stunning piano/trumpet intro that its theme first becomes crystal clear.

Two of the three original tunes feature vocals by Z and Rae and they're the weak points of the record, despite both having fine enough voices. The problem is that, amidst an album of fairly hard blowing and group interplay, "Moon and Sun and "Walking on Water feel lightweight and too obviously aimed at airplay.

Short but intensely burning takes of Henderson's "Inner Urge and Shorter's "ESP are notable in how their own memorable melodies fit contextually with the rest of the material. Proof that modern pop/rock can provide plenty of grist for the improvising musician, Dept of Good and Evil is, despite its two vocal missteps, even more successful than Everlasting in its meshing of contemporary song with equally contemporary swing.