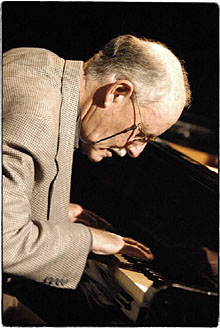 Without any fanfare Don Friedman's piano a cappella intro to "Alone Together intricately established the melody and sequence of his first performance on Friday the 9th of March 2007 before the evening's lead instrument, an antique green-tinged brass saxophone played by the youthful Gary Smulyan—bespeckled above, soul patch below and wearing a beret on top—stood in the piano curve improvising with the power of a full-ranged baritone saxophonist supported by Doug Weiss on a gorgeous dark-maroon wooded, recently repaired bass and by Tony Jefferson playing meticulous time on drums.

Don Friedman—now in his 70's, almost white haired, also bespeckled and wearing a gray moustache over a continuous smile—was considerate enough to announce every tune beginning with his recent composition "Autumn Colors. His ostinato rhythmic beginning established the tune with an international Middle Eastern flavor sounding like Dizzy's "Tunisia. Smulyan, with the help of Weiss's quietly staccato solos and Jefferson's cymbal inflections, completed the first go round on the tune. The rehearsed melody returned, by now memorable. Later Friedman explained, "I soloed like it was autumn into winter. I think in musical terms, very open, allowing lots of room for improvisation. Early in his career Mr. Friedman was known by his recordings (1961-1964) for Orrin Keepnews st Riverside Records. Now he teaches at NYU and is Clark Terry's first-call pianist, a priority he has enjoyed for almost fifty years.

On "Bouncing With Bud Smulyan immediately played Powell's tune at a tempo faster than the composer's intent but one that has become the practice at Monday night showcases like those at the Village Vanguard, where rehearsal ensembles since the original Thad Jones/Mel Lewis Vanguard Jazz Orchestra continue to improvise on arrangements of original tunes and jazz standards.

When Friedman said, "We're going to continue with Henry Mancini's 'The Days of Wine and Roses'," I mistakenly thought his choice of a pop tune represented pandering to this Japanese hotel's well dressed businessmen until Gary Smulyan opened unaccompanied, just tearing up the verse like Mr. Mancini probably never heard it, then immediately attacking the chorus with no less abandon. Friedman, however, rendered the beautiful melody in his own pianistically selective, efficient style, refreshing what might otherwise have been an insipid throwback ballad. The title's allusion to vintage grape reminds me to tell you about the menu at Kitano Lounge: eclectic and plentiful appetizers, dinners in the $20 dollar range, a full sushi menu and an extensive international wine list. I enjoyed a chicken quesadilla from the Bar Lounge Menu. It came hot, filled with grilled chick chunks and a nondescript yellow cheese with a tiny dollop of avocado and a spicy pink dressing.

Next, a Friedman original "Almost Everything, again in the hands of Smulyan, sounded like something from an era when tenors blew wonderful melodies in their lowest, fullest registers. After the baritone sax's midrange statement, occasionally accented with below-the-curve vibrating sounds, it was Friedman's solo that changed the mood to a quieter swinging romance, one telling an unknown story—or a story known only to the author of "Almost Everything.

As the room emptied, others were waiting for the best lounge chairs right up front in this intimate room.