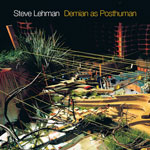 Altoist Steve Lehman's quintet recording Artificial Light was one of last year's best albums, but Demian as Posthuman couldn't be more different. The mathematical-time compositions and bracing band dynamic of last year's release sounded utterly modern, but it was essentially a recording made by musicians playing in real time. The new release features some fine players, but in many respects it's a Lehman solo record. Several songs include pianist Vijay Iyer, electric bassist Meshell Ndegeocello, and turntablist Jahi Lake, but most consist of Lehman (often in overdubbed, multiple configurations) and drummer Tyshawn Sorey, whose vaunted kit attack is stripped down to dry, repeating patterns that intentionally mimic electronica or hip-hop drums.

In contrast to the almost audio-verité live band sound of Artificial Light, this disc has a palpably unnatural studio sound, and indeed, Lehman is as much producer (he co-produced with Scott Harding) as player. The album, in fact, originally included a fantastic Lehman remix of a popular hop-hop group's song that would, perhaps, have underlined his role here as producer—but the tune was left off due to clearance issues, perhaps fortuitously, because the recording works better as a whole without it.

Several of the pieces appear in multiple configurations that give them a plastic, three-dimensional quality—like sculpture, we're able to "see" them from various vantage points. "Damage Mobility is presented first as a brief, minimalist overdubbed-alto quartet of temporily staggered, harmonized horns. Then we get the same alto parts in another version—the greater length emphasizing the hypnotic quality of their overlapping notes—bolstered by Lehman's programmed effects and Sorey's restless, fidgeting entrances and departures.

"Cognition appears in four different versions, all incrementally discrete. "Cognition - Curtis Duncan has a duo of Lehman's altos playing contrapuntally over Sorey's click-clack precision; Lehman is playing very similar lines that keep returning to the song's key melodic phrase, and the closeness of these alto parts give the music a shimmering, blurring effect—again, that sculpture-like quality of seeing the melodies from slightly different angles. The studio milieu's essential to "Cognition in all its forms—it's really about exploring two-alto counterpoint.

"Logic - Meshell has Lehman's alto and Jahi Lake's turntables chopping across an anxious, constrained groove created by Ndegeocello's bass vamp and Eric McPherson's in-the-pocket drumming. Whatever Lehman's talents are as a conceptualist, he's also a flawless, if deeply angular, melodist, and his Morse code phrasing has a bracing warmth as his clipped lines dance, pivot, and influoresce around Ndegeocello's bass.

Finally, there's "Demian, an eerie landscape where Lehman's alto alternately follows and resists against a wall of droning, becalmed, effected altos that sound like a warped blend of flutes and foghorns. There's a great sense of struggling against static constraint that's enhanced by Sorey's drums, which may mimic electronica beats but are always too variable and human to truly pass as robotic.

The compositions, musicianship and overall conceptual attack of Demian as Posthuman make it a complete success—as opposed to an interesting novelty. What's Lehman going to do next?