By Renato Wardle
October 11, 2005
Sign in to view read count 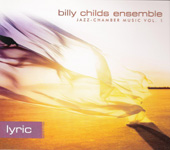 Since its birth, the world of jazz has been at odds with the realm of classical music. Owing to the presupposition that these two musical worlds are possessed of an incongruent aesthetic, a fusion between them may seem impossible. However, Lyric shows that music is music. With the first installment of his new Jazz-Chamber Music series, pianist Billy Childs fuses elements of jazz and classical music into a convincing, seamless whole.

The merging of jazz and classical music presents an interesting choice to the artist: will the character of chamber jazz be presented merely in the approach to song form and improvisation, or will the instrumentation be augmented to include elements not normally present in the jazz oeuvre? Billy Childs goes both ways with expanded instrumentation as well as a certain chamber jazz sensibility in song form, orchestration, and improvisation.

As the core of his ensemble, Childs has taken the conventional piano trio format and augmented it with harp and guitar. On "In Carson's Eyes, rather than functioning as separate entities, Childs has orchestrated the piano part between the harp, guitar, and piano. This approach gives a sense of space to the enlarged instrumentation, creating a much richer, yet simultaneously less dense chordal sound.

While much of the record is comprised of classically based music, Lyric also includes several examples of burning piano trio interplay. On "Into The Light Childs uses fiery piano trio interaction as a unifier to connect the fusion-oriented intro and the classical-oriented outro. He continually uses the piano trio to form dovetails from the different sections of each piece, uniting the album into a cohesive whole.

Comprised of a jazz and fusion sensibility based primarily in the works of Chick Corea and a classical sensibility borrowing from several eras, Lyric avoids the common pitfalls of chamber jazz: redundancy and a cloying pretentiousness. Childs presents diverse classical aestheticism with a baroque influence on "Prelude in B-Flat Major ; Stravinsky's neoclassicism meets Debussy's impressionism on "The Old Man Tells A Story ; Copland-esque sonic textures appear on "American Landscape ; and an aggressive fusion approach lights the way on "Scarborough Faire. Rather than making a cliché chamber jazz record, Billy Childs pushes the envelope with extreme diversity, creating sustained aural interest throughout the record.

Fusing diverse musical elements in a jazz setting is a risky business. Unlike pop music, with its tried and true "everything and the kitchen sink inclusionism, fusion of any kind is still taboo in some parts of the jazz world. With a high degree of musicality from both Billy Childs and his sidemen, cinematic programming of pieces, and representation of diverse eras of classical music, Childs succeeds where others have failed in making a cohesive, exciting, swinging record.

In Carson's Eyes; Goodbye; Friend; Into the Light; Prelude in Bb Major; The Old Man Tells His Story; Hope in the Face of Despair; Scarborough Faire; Quiescence; American Landscape.