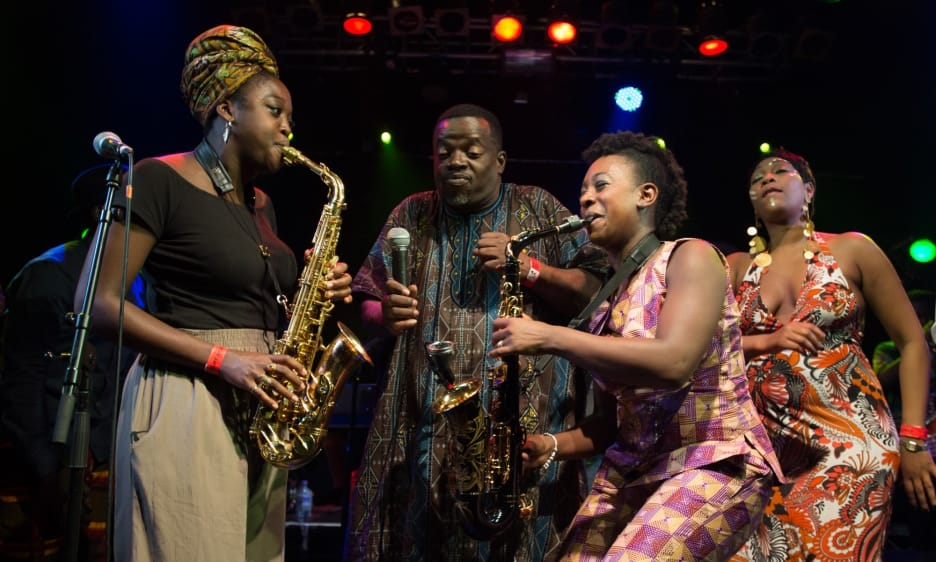 Time was when if Londoners wanted to hear authentic live Afrobeat they needed to take a flight to West Africa, preferably Nigeria. Not anymore. All they need do in 2020 is take the subway to the next gig by the Dele Sosimi Afrobeat Orchestra. The band has been gaining traction every year since its formation in the early 2000s and is now approaching perfection. There are new kids on the block—notably Kokoroko, which features the Mercury Prize-nominated saxophonist and composer Cassie Kinoshi—but Sosimi's is the most all-round incandescent ensemble outside Africa, one that is the equal of the two mighty Lagos bands led by style originator Fela Kuti's sons, Femi and Seun.

A child prodigy who became keyboard player with Fela's Egypt 80 when he was still in his mid teens, Sosimi stayed with the band for seven years, leaving in 1986 to become the musical director of Femi's newly formed The Positive Force. He left that band in 1994 to return to London, where he had spent the first few years of his life. The Afrobeat Orchestra released its first album, Turbulent Times (Eko Star) in 2002, followed by Identity (Helico) in 2007 and You No Fit Touch Am (Wah Wah 45) in 2015.

The Afrobeat Orchestra's fourth studio album is expected in late summer or early autumn 2020 and tonight Sosimi road tested some of the material—"No Long Tings," "Money Get Power," "Shake Your Bodi" and "Different Category." (This "No Long Tings," incidentally, was written in 2013, predating the piece with the same title recorded by London woke-jazz luminaries Binker Golding and Moses Boyd in 2015). The non-stop ninety-minute set also included perennial Afrobeat Orchestra favourite "TMI" plus "E Go Betta" from You No Fit Touch Am. Sosimi's set list always includes a Fela Kuti tribute and tonight it was a furiously paced reworking of "J.J.D. Johnny Just Drop" from Kuti's eponymous 1977 album.

The Afrobeat Orchestra never sounded tighter, its exactingly rehearsed lineup threatening to make James Brown's JBs sound sloppy. The five-piece horn section is a joy in itself, including baritone and bass saxophones and trombone and packing enough bottom-end wallop to change the outcome of the Super Bowl. Anchored by surging bass, drums and percussion grooves, topped by Sosimi's feral Nord keyboards, and with style-signature lead and tenor guitars in the mix, the ensemble is an unstoppable high-impact love train.

The evening began with a thirty-minute set from the Yung Afriqa Pioneers, whose lineup, despite the name, actually comprises expat veterans of classic Ghanaian and Nigerian highlife bands augmented by younger players. Their music was an engaging warm-up before the full-on body slam that is the Afrobeat Orchestra, and the entire evening was rapturously received by a capacity audience.