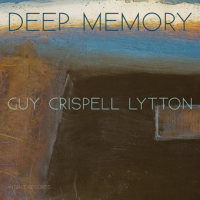 Bassist Barry Guy took a key role in pianist Howard Riley's groundbreaking trio in the late 60s, early 70s. And while that early experience has in no way defined him, it means it perhaps comes as less of a surprise that he has increasingly turned to the format in the latter part of his career. One offs apart, the two enduring piano trio vehicles for the bassist are the Aurora Trio with Agusti Fernandez and Ramon Lopez, and the accomplished unit here with the American pianist Marilyn Crispell and drummer Paul Lytton. Deep Memory constitutes the fourth entry into their discography, maintaining the standard set by Odyssey (Intakt, 2002)Ithaca (Intakt, 2004), and Phases Of The Night (Intakt, 2008).

Guy of course is not only one of the world's pre-eminent bassists who has excelled in jazz, improv, contemporary classical and early music fields, but an acclaimed composer in the first three, with legendary ensembles such as the London Jazz Composers Orchestra, BGNO and latterly The Blue Shroud Band. As such he brings his exquisite touch as both author and hyperactive participant to this program of seven of his charts. Consequently the group's geometry is not an equilateral triangle like it might be in a totally freeform outfit.

Instead the scored materials here serve as a showcase as much for Crispell as for Guy, in that the bassist's notation exposes not only her fiery unfettered side, displayed to such great advantage during her tenure with Anthony Braxton's classic quartet, but also her gentler side, revealed on her ECM dates from Nothing Ever Was Anyway (1997) on. Similarly enjoying a peerless reputation as a free thinking improviser, Lytton nonetheless proves a sensitive accompanist, who deploys both precision and power as required.

Guy's structures angle the trio somewhere between reflective jazz and robust contemporary classical end points. In the liners he talks about reimagining and revisiting moods explored on previous albums that have served them well. And that's exactly what they do. In line with past practice Guy also reworks tunes from other settings, so the inaugural "Scent" is actually a reinterpretation of the "Song" from The Blue Shroud, brimming with heartfelt melody and Spanish-tinged flourishes.

Several pieces hinge on the contrast between ballad forms and controlled thunder. "Fallen Angel" acts as a complete contrast to the opener courtesy of frantic tumbling motifs which eventually frame rich harmonic discourse, while the gentle Satie-esque beginning of "Sleeper" gives way to the high drama of a strikingly percussive interior.

At the opposite extreme, Crispell unleashes jagged torrents recalling Cecil Taylor's in terms of snap and intensity, on the energetic "Return Of Ulysses," which also offers full rein to Lytton's galloping cadences. "Dark Days" starts in a comparable vein, with a theme forged from hammered tremolos and abrasive arco whooshes, before relaxing into a melodic fugue-like interlude until gradually building up to the return of the initial gambit.

But whatever the tactic, the end result is absorbing statements that both stimulate the mind and rouse the spirit, often at the same time.