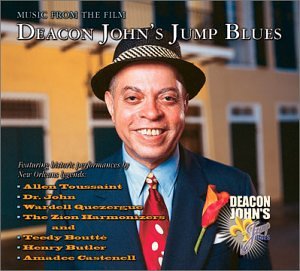 From the opening salvos of Ray Charles’ "Jumpin’ In the Morning" to the closing notes of Jimmie Cox’ "Nobody Knows You," it is easy to hear that Deacon John’s Jump Blues is an unadulterated celebration of New Orleans’ own brand of rhythm and blues. This blend of gospel, blues, soul and of course jazz, is music by which to celebrate life in all its joys, sorrows, disappointments and accomplishments.

Jeff Hannusch writes of Deacon John Moore, “In a career that spans more than 40 years, Deacon John has endured as one of New Orleans’ most talented – and most musically adaptive – performers.” Indeed his guitar playing made him a fixture on all the top records produced at Cosimo Matassa’s legendary studio in the late' 50s and early '60s, including Aaron Neville’s "Tell It Like It Is" and Chris Kenner’s "Land of 1,000 Dances." But this recording session puts Deacon John center stage with assists from legendary New Orleans performers Dr. John, Allen Toussaint and Wardell Quezergue. Add to this the talents of more than a dozen of New Orleans best session players and rising stars and you have tomorrow’s music history lesson being played today.

The disc opens with "Jumpin’ in the Morning," a classic jump blues first recorded by Ray Charles. Here, Deacon John’s unique vocal styling is showcased, along with the incomparable drumming of Herlin Riley. Riley, at home in any musical genre, never ceases to amaze and only his live playing can rival his recorded music. The unique nature of this project (a companion live concert DVD is also available) serves to underscore his ability. Other highlights include collaborations with Henry Butler ("Big Chief") and a sophisticated jump blues cover of Joseph Liggins’ "Going Back to New Orleans."

If Deacon John and the other front-liners give the project its soul, then the big band section provides its heart. Jump blues is a musical genre steeped in the tradition of making people dance and it’s the role of the big band section to get the audience swinging. Make no mistake, this section swings with the best and is based in a jazz tradition. With the personnel on hand, it’s hard to believe that this group does not perform together regularly. Check out "Going Back to New Orleans" for a complex, syncopated sound reminiscent of big band arrangements from the '40s.

Music permeates New Orleans society and musicians can be found everywhere. For example, baritone saxophonist Carl Blouin, Sr. is finance director for a local high school by day and has spent years as a math instructor, high school principal and music teacher. Among those he numbers among his former students are director of jazz studies at the Julliard, Victor Goins and jazz trumpeter/composer/educator Terence Blanchard.

With the studio CD, concert DVD, DVD-A and a forthcoming documentary feature film, it appears that this much-needed preservation of New Orleans music has begun in earnest.