By Troy Collins
January 5, 2011
Sign in to view read count 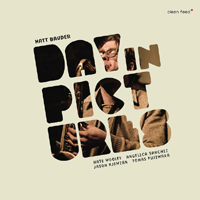 Day In Pictures is Matt Bauder's first traditional jazz recording as the leader of a stellar acoustic quintet. Far from a debut, the young Brooklyn-based multi-instrumentalist already has a number of eclectic releases to his name, but none delve as far into the nuances of jazz tradition as this refined platter. His previous albums expand on his work as a sideman to adventurous peers like Taylor Ho Bynum, Harris Eisenstadt and Rob Mazurek, including his electro-acoustic debut, Weary Already Of The Way (482 Music, 2003), and the improvised chamber music project, Paper Gardens (Porter, 2010), in addition to a trilogy of albums made with the collective trio Memorize The Sky.

Bauder shares ample solo space with his band mates, proving to be as resourceful an improviser as he is a writer. Whether on tenor or clarinet, Bauder excels at building narrative solos that seamlessly integrate euphonious lyricism and wooly abstraction. His probing tenor solo on the hypnotic opener "Cleopatra's Mood" is emblematic, effortlessly juxtaposing diaphanous filigrees and whispered motifs with trilled flurries and gruff multiphonics.

Occasionally augmented by understated electronic effects, the date draws a subtle parallel to another sonic innovator, Rahsaan Roland Kirk—an iconic presence whose all-encompassing pre-Post Modernist aesthetic is widely championed in the Brooklyn scene. Although it represents only one aspect of Bauder's talents, Day In Pictures is a beautiful record, presenting a well-crafted program of modern jazz that expertly balances past traditions with future innovations.