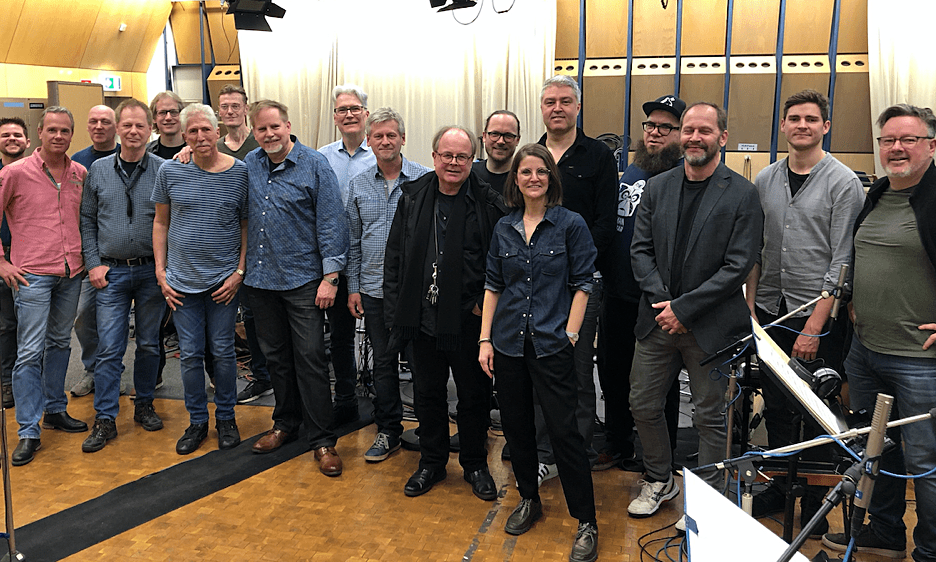 Hearing Bob Mintzer’s beautiful arrangements of the music I perform (usually in a smaller group) was definitely inspiring.
&#151Dave Stryker

Dave Stryker is passionate about music and its positive energy. From his time working with Jack McDuff and Stanley Turrentine to his years as a solo artist, Stryker has established himself as one of the foremost jazz guitarists around. He also teaches at Indiana University, Montclair State University, Rutgers University, and has an online instructional workshop at ArtistWorks. With the album, Blue Soul (Strikezone Records, 2020), Stryker teams up with Bob Mintzer and the WDR Big Band from Cologne, Germany. Together they have produced an album that is a much-needed breath of fresh air. Here, Stryker gives some insight into the making of Blue Soul.

Bob Mintzer has been the chief conductor of the WDR Big Band since 2016. He is also a renowned tenor saxophonist, composer, and arranger whose working relationship with Stryker goes back for years. However, this is their first collaboration with the WDR Big Band. Stryker discusses how this project came about. "Bob and I met when I first came to New York in 1980. I have always been a big fan of him as a player, a writer and arranger, and especially as a person. He is a very inspiring person to be around. I had used Bob as a guest with my organ trio for some gigs and tours, and he thought my music would be a good match for a project with the WDR Big Band in Cologne, Germany."

Stryker arrived in Germany in March 2019, and Mintzer had everything ready to go. "He arranged the music, and when I arrived the WDR band read everything down like the pros they are. We had three days in the studio to rehearse and record, and play a few concerts—the results of which are Blue Soul. The music was recorded with no overdubs (the way I like to do it), so there was a great feeling and energy amongst all the musicians."

With music, as with any other art form, an artist has something he or she wants to say, and Stryker certainly has some positive and uplifting messages with Blue Soul. "One of the things I love about jazz music is the improvisational aspect and trying to tell a story whenever you are playing. The different settings you find yourself in can inspire those stories." As Stryker points out, the context of the performance and the chemistry among the players can open up a whole new world of creativity. "Hearing Bob Mintzer's beautiful arrangements of the music I perform (usually in a smaller group) was definitely inspiring."

As Stryker mentions, he often plays with a smaller group such as an organ trio, and even though Blue Soul is in a big band setting, the organ trio feel is still at work throughout much of the recording. Stryker explains how Mintzer helped to accomplish this. "He used my small group arrangements as a template, and what he added with his own creativity took the music to another dimension. Hearing such an incredible band as the WDR rising to the occasion was a real gift." The close interaction among the musicians comes across strongly in the recording. "I think it is a somewhat unique project putting the guitar in front of a super tight big band. Adding Bob Mintzer's arranging and tenor sax playing makes it even hipper."

The selections on Blue Soul couldn't be better. The album features a mixture of original material along with a few well-chosen covers. Stryker composed many of the songs such as "Shadowboxing" and "Blues Strut," which have become essential pieces in his repertoire. The album also features the excellent Mintzer original, "Aha," which showcases Mintzer's skills in composition along with his talent as a player and arranger. "Stan's Shuffle," written by Stanley Turrentine, is a fitting tribute to the man Stryker worked with for years.

Blue Soul also revisits some songs from Stryker's popular Eight Track series, which features jazz versions of popular songs from the seventies and early eighties. While the album could have included some traditional jazz standards, featuring songs like "Trouble Man" or "What's Going On" gives more of Stryker's fingerprint and helps to effectively convey his message. As he explains, "I want to bring positivity into music and connect with people. It has been a challenge and fun to arrange some of these great soul tunes so that I can put my own stamp on them, and we can approach them almost as if they were modern jazz standards." Including some of these songs helps to give Blue Soul its hopeful and positive feeling. "I have been performing a mixture of my own music with some of these new standards from my Eight Track series. I feel this is a great way to communicate with people as they have more of a connection to the music when they recognize a melody they love."

With Blue Soul, Stryker definitely connects with listeners. There is a solid groove throughout, and as Stryker puts it, "hearing Bob's arrangements was very uplifting." This album has a positive energy that, as Art Blakey once famously said about jazz, "washes away the dust of everyday life." This energy and the outstanding performances help convey Stryker's overall optimism. "Everything grooves, and I hope people will get some joy and beauty from listening to Blue Soul."