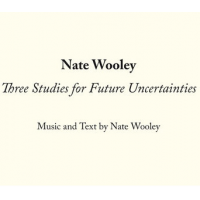 Trumpeter/composer Nate Wooley has built a catalog of experimental music that has advanced in technique and vision over the past decade. Those years have been benchmarked by The Almond (Pogus Productions, 2011), a single solo track of overlaid trumpet loops that blurred perceptions with its subtle shape-shifting, and Argonautica (Firehouse 12 Records, 2016), a sextet project flooded with gauzy atmospherics and more potent interludes. More recently, Wooley released the four-disc box set The Complete Syllables Music (Self-Produced, 2017), an epic-sized solo collection utilizing trumpet, amplifier, tape, and analog synthesizers. TTE001: Three Studies for Future Uncertainties, is Wooley's first multi-media undertaking.

Another solo outing, TTE001's full title refers to a limited-edition book featuring Wooley's writings about music, a short story, and reproductions of embroidered scores of artist/dancer Jen Mesch and drawings of Ryan Sawyer. The music—two extended pieces—are stand-alone components and represent Wooley's first all-electronic compositions. "Study for a Mass (for Agnes Martin)" and "Intermediate Wobble Study" each run eighteen minutes and ten seconds. If there is an intended symmetry to the track lengths, the significance is a mystery. "Study for a Mass" is the more meditative of the two pieces and bears some resemblance to The Almond, conjuring subtle, ever-changing silhouettes. "Intermediate Wobble Study" features percussive effects, squelches, and drones but doesn't raise alarms. On both pieces, but particularly on "Intermediate Wobble Study," Wooley's attention to precision renders the digital landscape in vivid colors.

Electronic music can sound elementary; the whirr of technology a form of anesthesia. It requires unpacking to appreciate what lies beneath the surface. TTE001 is headphone music. Distinct but attenuated sounds and resonances habitually materialize, the variations growing less repetitive with recurrent listening. Wooley artfully inserts tonal deviations within the blanket of sound, generating a compelling, and contemplative experience.

Study for a Mass (for Agnes Martin); Intermediate Wobble Study.