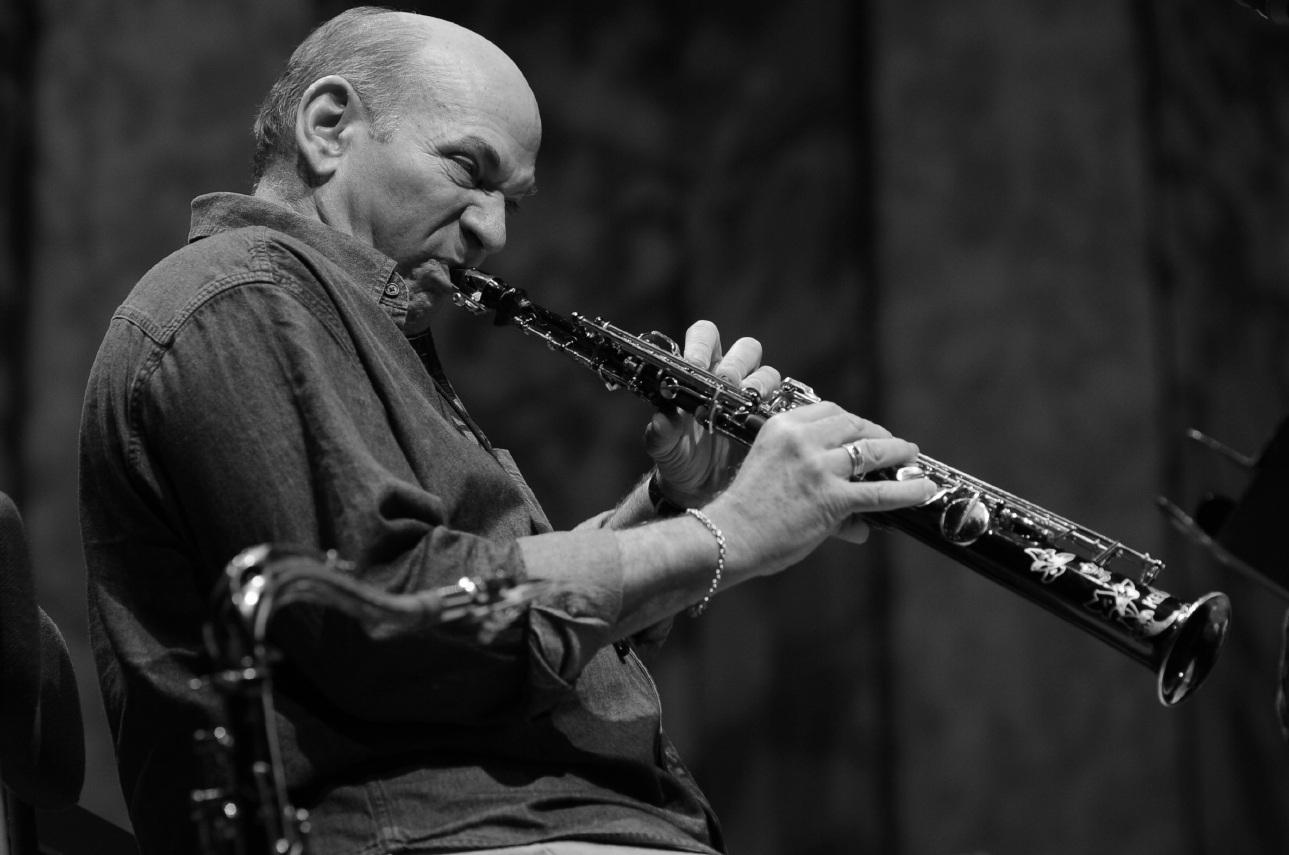 Soprano saxophone master Dave Liebman kicked off a short West Coast tour Thursday evening at Anthology, San Diego's premiere jazz nightclub. Liebman is experimenting with a more electrified version of his working ensemble (of over 20 years now), to that end, long-time bassist Tony Moreno was heard on electric bass all night. Liebman's front-line partner in the quartet is the vastly under-rated guitar virtuoso Vic Juris who showed his mastery of the instrument to be the equal of anyone playing today. The newest member of the ensemble is drummer Marko Marcinko who's been with them for "just" ten years.

The concert began with two Liebman orginals: a modified blues, (the chart was three pages long), "Smokin' At The Cafe," and a piece inspired by the Wayne Shorter classic "Night-Dreamer" christened "Dream Of Night." "Smokin' At The Cafe" sort of set the agenda for the concert's arc. Liebman played through the melody, then played a very short solo—and turned it over to Juris—who unwound a long, organic statement starting off with well spaced chord voicings and slowly expanding single note legato expressions. These gradually built in intensity to a crescendo—then eased back into tasteful voice-leadings, at which point Liebman told a much longer soprano story, full of intricate details and ever increasing intensities. The saxophonist also used tasteful amounts of digital delay, creating melodies that staggered around and on top of each other—to spell-binding effect.

"Dream Of Night" utilized a similar, loose arrangement strategy. After stating the melody, Liebman carried on with a serpentine saxophone solo, stopping several times before it got prematurely out of hand, then building to rapid-fire, racing trills that got a little "grainy" tone-wise. This time, he handed off to drummer Marko Marcinko who took a terrific drum solo—that featured wide shifts in dynamics and a similar, patient, approach—as far as telling a story in a solo. Up next was a tune called, "Brother Ernesto." This one featured Juris trying out a brand-new Taylor acoustic guitar. Apparently, this was the first time the guitar had been played—but you couldn't tell that from Juris' solo—he put the guitar into combat mode immediately—finger-picking wicked arpeggio stretches and executing speedy scalar passages—and finally, changing the envelope entirely by stepping on pitch-shift and vibrato pedals to make it seem like the neck was being pulled apart by invisible forces. Again for his solo, Liebman took his time. He'd play an increasingly fast series of modal runs, then suddenly stop—take the horn out of his mouth—and wait, until the time was right to continue. The virtuosity of a master.

Things just kept getting better: Liebman then announced a Vic Juris arrangement of the Ornette Coleman composition, "Una Muy Bonita." This performance was an ecstatic highlight. The arrangement was episodic in scope—it visited several moods and tempos and stylistic grooves—from Latin tinged, to rocking out a la Ornette's "Prime-Time," to a hard, bluesy swing. Juris' solo began with his heavily processed guitar engaged in a long solo cadenza that came to a climax with other-worldly pitch shifting that almost ended in scream therapy. After a short bass solo by Moreno, the gears shifted on a dime into swing-time. Marcinko the drummer, dialled up his ride-cymbal pinging and cross-stick commentary until his motions at the kit started to blur visually. The arrangement had arrived at the "totally-off-the-map" phase—it was truly "free-bop" when Juris surprised everyone with some beautiful harp-harmonic arpeggiating that led back to Ornette's life-affirming, joyous melody.

The saxophonist shifted gears dramatically by visiting the Brazilian composer Antonio Carlos Jobim's composition, "Zingaro." Once again, Juris made use of the Taylor custom-acoustic guitar to pluck out some appropriately tasteful chord passages. Juris' approach to chord work and his knowledge of harmony was nothing short of amazing. The Liebman quartet took "Zingaro" down a different path. Their version was slower and sounded more like a modified tango than a bossa-nova. It was beautiful without being syrupy.

Next was a Juris piece: "Romulans." This one was way different. It started out with a long, wild drum solo that featured Marcinko holding a notched drumstick with pressure on his snare drum then using the other stick to rub manically against the held one—producing a "gourd-scraper" type effect. The results were intense and highly creative. Eventually, Marcinko's drum solo settled into a rock/funk beat and Liebman took over, using his delay device to create layers of soprano sound that snaked around each other until they climaxed. Then it was the composer's turn—he didn't disappoint. Juris took a long, effects-laden solo that went everywhere and seemed to do everything. What started off as sounding like their version of a rock tune soon ended up sounding like Sun Ra scoring for the "Outer Limits." At the absolute peak of "Romulans," the guitarist stepped on an automatic arpeggio generating pedal for some totally whacky "space" effects. "Romulans" proved that the Liebman ensemble was not your grand-father's jazz combo. It was a lot of fun and great improvising at the same time.

That might have been the highlight of the concert, but Liebman had something else entirely on his mind for the finale. This performance was held on September 23, which happens to be John Coltrane's birthday. Liebman reminded the crowd of this fact, and as a celebration of such, deigned to play the wonderful Coltrane vehicle for improvisation: "India." He began with a long unaccompanied performance on a small, wooden flute, milking every ounce of exotica from it before grabbing up his soprano and leading his group through a tour-de-force exploration of the modal-jazz classic. There were inspired solos from everyone, capping a terrific evening.