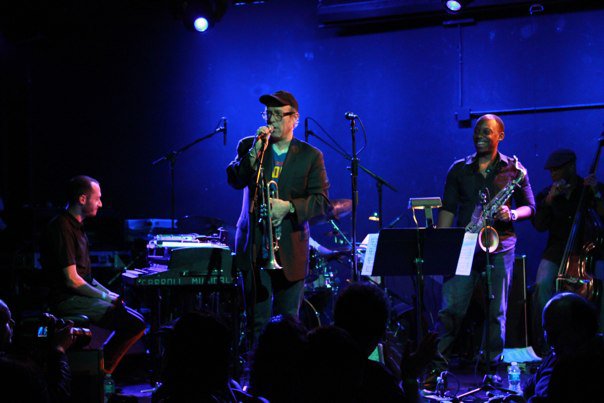 It seemed somehow fitting that composer Dave Douglas' presentation of Spark Of Being (Greenleaf Music, 2010) be held in the aftermath of the blizzard of 2011. The audience for this retelling of Mary Shelley's Frankenstein, which begins and ends with a sailing ship frozen in the ice of the North Pole, had traveled to the Lincoln Theatre through huge drifting snows, with trees and power lines splintered by a monstrous ice storm.

The trumpeter and his electric sextet (minus one) were concluding a tour presenting his soundtrack to Spark Of Being, a film by Bill Morrison that is a reinterpretation of Mary Shelley's gothic tale. Morrison remade the film from archival and found film, splicing together often damaged and distressed footage to create a being not unlike the beast itself. Dwarfed by the huge movie screen, Douglas and his Keystone band of Adam Benjamin (Fender Rhodes piano), Marcus Strickland (tenor saxophone), Brad Jones (Ampeg baby bass), and Gene Lake (drums) performed in the left corner of the stage. The sextet was missing its sound generator, turntablist DJ Olive, whose wife had recently given birth to their child. The symbolism of Dr. Frankenstein exclaiming, "it's alive!" wasn't lost as soundboard technician Jeff Countyman filled in with samples and the "dead" sounds DJ Olive had resurrected for the soundtrack.

In concert, Keystone managed the disciplined sequence of the twelve parts of the film by playing music that recalls Miles Davis electric years, but with a more strict, self-governed approach. Like Davis, Douglas is a lyrical player, seemingly always defaulting to beautiful sounds. His trumpet growl or flutter was always in service of the visual, and his frequent use of his trumpet mute seemed to differentiate the human voice from the mechanical. Throughout the evening, the leviathan on stage was drummer Gene Lake. His titanic eruptions were a pot constantly boiling. In the creation scene, Lake went toe-to-toe with a drum machine, and as the film displayed the laboratory exploding, he could barely be contained. Throughout, Douglas and Strickland acted as the keepers of the flame, stating the main musical themes of the evening. Adam Benjamin's electric piano, with its atavistic sound lingering somewhere in the past, evoked modernism yet sounded like a primitive (in 2011 terms) device.

As the film portrayed Shelley's foreboding 1818 tale of science and the misappropriation of technology, Douglas experimented with his 21st century tools: samples, musical apps and electronics, with the same apprehension Dr. Frankenstein had toward electricity. But whereas Dr. Frankenstein's hubris didn't allow him to appreciate his undertaking, Douglas surely does. Keystone's mastery of this technology and material maintained the film throughout.