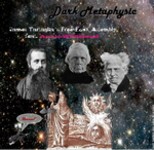 Thanks, as ever, to Google, it's possible to say with near certainty that British saxophonist James Tartaglia, leader of this electric funk-jazz ensemble, is the same person as Keele University lecturer in philosophy James Tartaglia, which raises an interesting question: what is the link between philosophy and funk?

This is not the first time the question has been posed. A lot of '70s-era music by Sun Ra drew upon funk to ground its elevated philosophical conceits (e.g. Space Is The Place, Evidence, 1974); around the same time, Funkadelic overlaid their ferocious funk with bizarre but arguably philosophical elements ("Promentalshitbackwashpsychosis Enema Squad (The Doo-Doo Chasers)" from One Nation Under A Groove, Warner Bros., 1978). Sun Ra and Funkadelic define two end points of a kind of continuum: Tartaglia's Dark Metaphysic lies somewhere in between.

The philosophical references accumulate pretty fast and furious—there's a piece dedicated to conceptual artist Bruce Nauman, who once dedicated a quizzical square of aluminum to John Coltrane (his John Coltrane Piece, 1969), as well as a song about Hermes Trismegistus, a mysterious combination of Hermes (Greek) and Thoth (Egyptian) who figures prominently in the philosophical systems of Anthony Braxton and Sun Ra, and who could pop up in your neighborhood Starbucks, according to "Hermetic Emanations."

Pretty heady stuff. What does it sound like? Mostly tight, jovial funk, driven by Jennifer Maidman's fluid bass and Mark Huggett's crisp drumming, punctuated by brief outer space episodes. On paper, the lyrics are a witty part of the disc's attempt to communicate philosophically, from the cheerleading affirmation of science in "Priests In White Coats" to the bitter, anti-music-biz screed "That Boy Were Gonna Play A Solo." Aurally, the singers sound far from the microphones, somewhere between distracting and irritating—not unlike some Sun Ra and P-Funk records.

Musically, there are touches of greater sophistication than first meets the ear. "Rhythm Pitch" and "Pornographer Scum," for example, accelerate and decelerate abruptly to highlight the band's dexterity, but also to destabilize the listener, a little like the memorable "Miula" from Guillermo Klein's Filtros (Sunnyside, 2008).

In their long solos—trombonist Annie Whitehead's are especially good—the players face a challenge: how can improvisers trained to exploit harmonic cues sustain inventiveness over single-chord vamps with little melodic variation? Members of Miles Davis's 1970s bands grappled with this question: Gary Bartz, Dave Liebman, and best of all, Sonny Fortune. This certainly has something to do with Davis' famous remark that his records from that period had successfully extirpated all European influence. A bold statement worthy of musico-philosophical rumination. Arguably, this gauntlet thrown down by Davis is the conundrum most thoroughly engaged by Dark Metaphysic, and here, the musicians prove they have something significant to say.