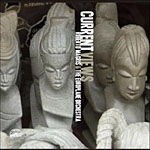 Redefining his relationship with contemporary music. Roberto Magris' Current Views finds the artist in a renewed setting with his Europlane Orchestra, but this time the ensemble is slightly smaller—featuring at any given time, anything from a septet to an octet. The album title suggests new perspectives on Magris' philosophy with regard to the use of sound in music. Here, the pianist/composer uses mainly brass to paint the canvases that soak in the very depths of sound, resonating with bell-like clarity as they emerge from seemingly bottomless pits of tonal colors. Even guitarist Philip Catherine, the only other stringed instrument (other than the bass), sounds almost horn-like in the long, sustaining lines.

Even in smaller groups than these, Magris has proven himself to be an astute listener and therefore able to write toward the creation of rich textures of sound. Here, as in other situations, he tends to think in terms of longer form of composition and although the pianist does not designate this repertoire to be a concerto or a suite of sorts, the fact that he looks at music from a distinctly European perspective, applying a more cerebral touch seems to lend itself to a collection of pieces that could be loosely deemed as such. "The Story Teller," a piece rich in exploratory sound, despite leaning strictly into the conventional aspects of harmony, appears to be the centerpiece and covers seemingly endless vistas of sound. "Dukish Interlude," by contrast, appears to be a musical stop for breath while the composer reevaluates his homage to the master who has guided his way along the path to now, and finds Magris writing and executing his ideas in a move that would have delighted Duke Ellington, but Charles Mingus even more.

"In Love In Vain," the only composition that is not by the pianist, is twisted to fit the composer's ideas of musicianship. Here, as elsewhere on the album, Magris employs startling contrapuntal devices, setting horn against horn in various registers. The result is a beautiful glide through oceans of delightful sound. "Hombres" is a contrast to most of the rest of the music, inhabiting the very fringes of tonality for a change. "React!" swings and leads the listener on a wild change of pace to the rest of the album, channeling musicians who defined Italian/European sensibilities in the '70s, most of whom were swept up in the sea of activity created by Soul Note's founder, Giovanni Bonandrini, including artists such as Don Pullen and George Adams.

"Steady Mood" is a classic ballad, written in the inimitable style of Mingus, recalling the bassist's best work, such as "Carolyn "Keki" Mingus" and others that will remain in the mind's eye for a long time to come. With the elegiac conclusion, "For Naima," Magris is making spectacular strides as a composer attempting to keep in step with the changing face of sound. Current Views is a sonic gem.