By Dan McClenaghan
February 3, 2018
Sign in to view read count 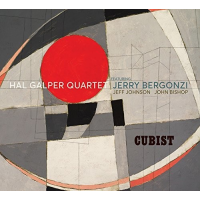 Count pianist Hal Galper as another veteran rising like the brightest of stars into a compelling late career zenith. An alumni of saxophone great Phil Woods' 1980s group, Galper found his inspiration of late with an exploration of the Rubato Style of playing, with its flexible approach to tempo and the disassembling of melodies and putting them, slightly askew, back together again, somewhat in the mode of the Cubist painters. Think Picasso, an image of a human figure in profile, with the entire face—both eyes, both nostrils, a full mouth—shifted to the viewer's perspective, visible from the side view. Like a human halibut. A person with appendages protruding from unfamiliar places on the torso, bent at impossible angles.

That's the picture Galper has been painting musically through six trio albums on Origin Records, beginning with Furious Rubato (2007), and rolling—like an unbalanced and underinflated tire—through O's Time (2014). Five of these six sets featured Galper's long time rubato compadres, bassist Jeff Johnson and drummer John Bishop; and with the passage of four years since the release of O's Time, and considering the consistent idiosyncratic and innovative excellence of their trio work, there was a sense that they had called it a day, that they had nothing left to prove.

The trio is back, in top form, with Cubist; and they invited saxophonist Jerry Bergonzi into the fold. It was an inspired addition to the sound. Bergonzi, like Hal Galper—and it's an old and common story—is one of those distinctively daring players who doesn't get the recognition he deserves. His horn lends recognizability to the stretched and molded melodies. He can be fierce; his tone is muscular. In the trio's ruminations and maelstroms he can sound like the voice of reason, or like a ranting maniac (with a method to his madness).

This deftly sequenced set begins with two familiar tunes, Miles Davis' always modern-sounding "Solar," and "Israel," from The Birth of the Cool (Capitol Records, 1957). This is a music always on the edge, leaning over the drop and thumbing its nose at it. They close in like fashion with Duke Ellington's "In A Sentimental Mood," and Galper's own "Scufflin,'" the former simply beautiful, the latter cooking as close, with a high flame, to the mainstream as the set gets, until the pianist takes his solo and wobbles off and slows down, as the lug nuts on that underinflated tire begins to loosen.

Centerpieced between the standards at the beginning and end of the disc sit four originals from the pen of the group's bassist, Jeff Johnson. A fine leader in his own right, with a discography that includes a handful of excellent discs under his own name and at least a score of listings as sideman, his compositions prove perfect vehicles for the group, with their more inward atmospheres and Zen flows.

In a long and successful career, and a huge discography, Cubist proves itself one of Hal Galper's finest.