By Roger Farbey
February 3, 2018
Sign in to view read count 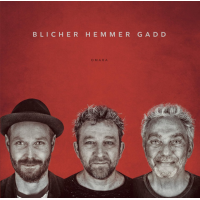 Recorded live in 2016 at various venues including London, UK, Odense, Denmark and Kiel, Germany, this is a very appealing organ trio album. The overriding ambiance of this live album recalls the late Jimmy Smith at his grooviest. Take for example the rocking blues of Willie Dixon's "My Babe" which motors along with a characteristic vibrancy. Notably here and on several of the numbers including the laid-back opener title track, Steve Gadd uses brushes to great effect, proving that deftness doesn't necessarily require overwhelming power.

Indeed such is his stature in the music industry that Gadd doesn't need any introduction here other than to emphasise his pre-eminence in the circle of jazz drummers. He's undoubtedly one of the most in-demand percussionists in the world and rightly so because he's one of the most talented; just check out the mesmeric subtlety of "On The Porch." His two fellow musicians in this project, Michael Blicher and Dan Hemmer, both hail from Denmark and collaborated with Gadd on their first album, the eponymously titled Blicher Hemmer Gadd, released in 2014.

The whole album swings at varying paces of intensity, from the toe-tapping briskness of "Korean BBQ" to the soulful traditional "Elijah Rock" to the sumptuous ballad "The Colour Red" and the irresistible funkiness of "Three Grains Of Salt." Throughout, Gadd allows his front line colleagues to shine whilst he plays with admirable restraint and precision, another mark of a consummate professional. Judging by the effusive enthusiasm of the audiences at the conclusion of each track and the consistently high quality of the numbers presented on this recording, this must be a great band to witness in the flesh.

Omara; Elijah Rock; They Had No Roses; The Colour Red; Three Grains Of Salt; My Babe; If I Were A Cow; On The Porch; Korean BBQ.