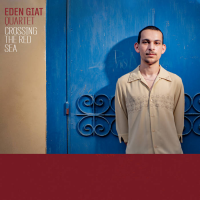 Given the dire state of the US both at home and abroad, it's a wonder that jazz musicians across the globe, in their own tongue, their own aesthetic and their own devices, still try to carry the music of American tradition forward while calling it their own. It only proves how marvelous and resilient this music continues to be and how wonderful it is to give witness.

The title track unveils Giat's pop verve with a darting melody bouncing about the tight perimeter laid down by Birnbaum and Michaeli while Drabkin blows cool. The reflective somberness of "Tnudat Hayam" ("Sea Movement" in his native language) is so deftly handled that one might be led to think this quartet had been around a handful of life's tricky corners and weren't all still in their formative years. With its ruminative, strategically repeated themes and subdued air, "Ha 'Sultan" has a folk dance quality that hangs in the consciousness. "Rustle of the Earth" is just that, building from a quiet subtlety to a democratic improv. The bluesy "Butterflies of a New Path" solidifies the quartet's firm understanding of the roots of the music and where they can grow their democracy from there.

Having already collaborated with forward thinking musicians Avishai Cohen and Omer Avital, young Giat approaches his own music like a kid drawing circles and then adding eyes or funny noses to make faces or weird animals and blue oceans to make planets or whatever might stretch the boundaries of said circle. Thus Crossing the Red Sea becomes an energetic, albeit short (just over thirty minutes) repeat listen. But it leaves the listener wanting more, and that's a great way to start.