Judging by the number of young musicians in the audience, pianist Craig Taborn has something of a reputation among the cognoscenti. That many of them were pianists too just whetted the appetite even more for his leadership debut in the UK in the supportive setting of north London's Vortex. Of course Taborn is far from an unknown quantity in town, having high-profile sideman gigs with Tim Berne, Chris Potter and most recently Vincent Courtois. Filling out his trio were longtime associate Gerald Cleaver on drums and more recent recruit Thomas Morgan on bass. 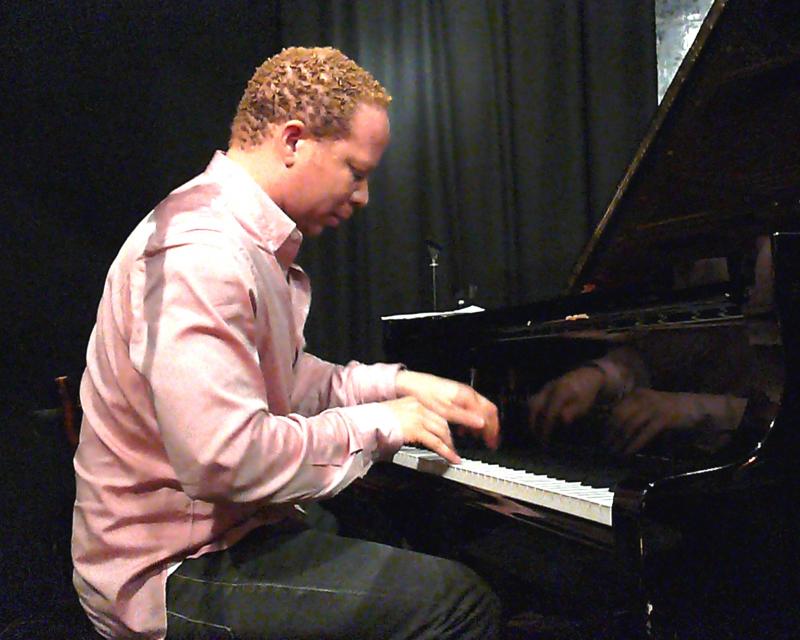 Though he has trio recordings to his name, Taborn stuck almost entirely with electronic keyboards on the last Junk Magic (Thirsty Ear, 2004), and it is not since Light Made Lighter (Thirsty Ear, 2001) that he dealt exclusively with acoustic piano. Tonight saw him ensconced safely behind the Vortex' Steinway, nonetheless exploring conceptual territory concerning the overlapping rhythms associated with techno and drum programming through his own compositions.

Like the pianist, Cleaver hails from Detroit, and the pair have gigged together for more than 20 years, starting as part of Roscoe Mitchell's Sound Ensemble and since then with improvisors across the board, including Mat Maneri, Rob Brown, James Carter [chck] etc. Both feature on the critically acclaimed Farmers By Nature (Aum Fidelity, 2009) alongside bassist William Parker in an hour long spontaneous performance remarkable for its equality and cohesiveness. Also, like Taborn, Cleaver moves freely between genres, simply refusing to recognize any demarcations to the imagination. Though upcoming bassist Morgan is from a later generation, he has already performed in a featured role alongside Steve Coleman, David Binney and Tyshawn Sorey, including appearing on the last's That/Not (Firehouse 12, 2007).

All three made a synchronized start to the first set with a repeated riff, which Taborn soon left to Morgan to sustain as he fired out a cascade of prancing, stiff- fingered variations. Cleaver underpinned with a foot-tapping Latin feel as Taborn explored the realm of minimalist repetition. As Morgan, too, departed the riff, "semi-free" became a "completely free-but-full" sonic canvas as they navigating by the seat of their pants. As the intensity grew, Taborn removed his jacket without interrupting his course one jot. In spite of the accessibility of the components, together they paradoxically generated quite an abstract music, with multiple criss-crossing parts inhabiting the same space but with dissimilar wavelengths combining for an exquisite tension that gripped the attention.

Taborn more than justified the professional interest, often belaying convoluted repeated figures with his left hand, sometimes in tandem with Morgan, while his right hand ranged far and wide, sounding as if there were an extra person on the bandstand. This impressive independence between the hands—a testament to intensive woodshedding—resulted in separate lines, only compounding the already knotty contours traced by bass and drums. Even recurrent riffs were subject to subtle modifications in voicings, fending off the familiarity which might bring contempt. Throughout the first piece, Taborn pitched in fast urgent patterns, his accelerating repetitions becoming trance-like and remorseless until he modulated into an even trickier motif. Such was the intricacy that oral cues were needed, with the leader shouting "OK," signaling the switch to an ominous theme delivered atop fast percussion, which involved both jazzier time and a correspondingly jazzy piano solo from a smiling Taborn. 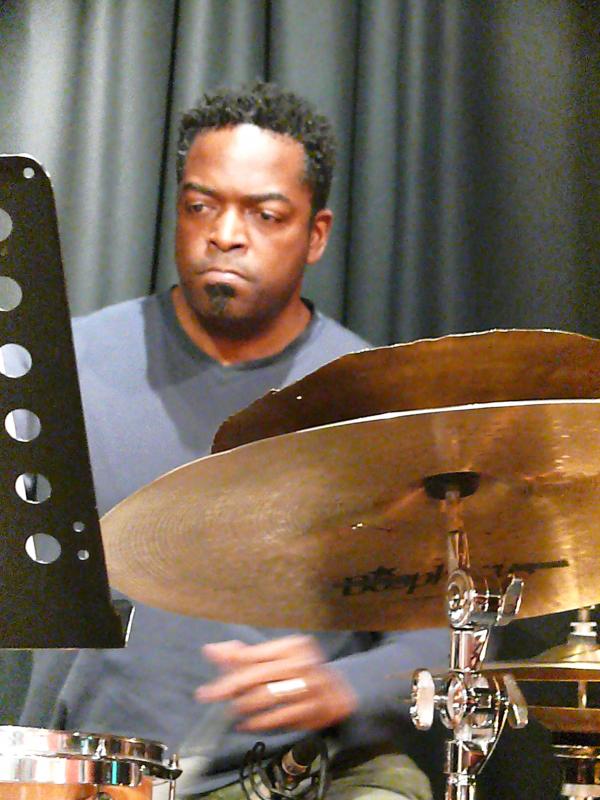 His bandmates proved the perfect foils: alert to every nuance in the charts, but bringing their own individuality to bear in unexpected ways. Cleaver was very busy, eyes closed, head facing down towards his kit, but ears cocked, with his crisply defined intricate taps, patters and fills filling every conceivable space with a bewildering variety of technique. But even within this constant flow he took pains to vary the textures. In one clattering outburst he was still able to include a passage where he pressed one stick on top of the other on the drum head and then slid it across to yield an understated whooshing thud, later striking the drum with the base of his stick and dampening it with his fist in a single movement for yet another of those distinctive timbres which can enliven even the best solo spots.

Morgan looked even younger than his 28 years but, in his choices, revealed a wisdom which belied his age. At times he came on like the polar opposite to Cleaver with a spare aesthetic that made each note count for much more than solely its own weight. His expression seemed to suggest a physical connection to his playing: he appeared to almost regurgitate the notes as if they were coming from deep inside him, at the same time as he plunged across the bass clef. 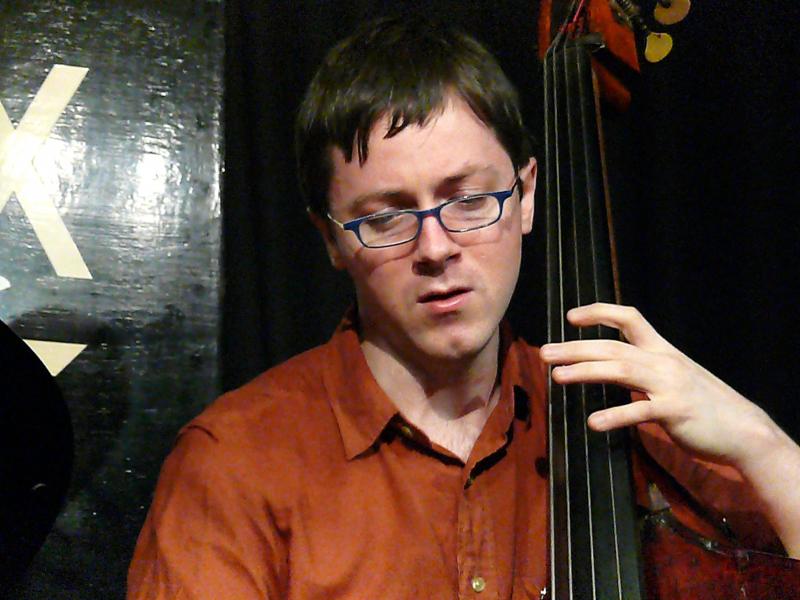 If the lengthy opener was all about manifold tempos and rhythms, then the next composition was a challenge of a different sort. At the opposite end of the spectrum in terms of dynamics, this was an exercise in restraint and audience listening skills, passed with flying colors by the attentive Vortex crowd. Opening with very gentle romantic musings from Taborn, ushered in by Cleaver with the most delicate cymbal strokes with his fingers, and a booming bass pedal point courtesy of Morgan, this introductory ballad teetered on the edge of falling into an abyss of silence. Taborn stroked the strings inside the piano for a ghostly humming rendition of tune. All three were bent intently over their instruments, striving to render the barest sounds imaginable. Taborn plucked inside while simultaneously sparsely fingering the keys, as the pace picked up to become merely funereal, before the culmination of a slow unfolding melancholic melody. After that, almost as a digestif, it was back to the involved realm of the first piece, with more brief but elaborate theme and variations, to close the set.

After the interval, throbbing bass started the second set, which Taborn promised to be all new material. As Morgan very gradually upped the volume, accompanied by Cleaver's flat thudding drums, so the level of complexity also escalated, with a latticework of angular but not meshing lines. Taborn's piano accents added a rhythmic cross current, and the intensity inexorably built, with the pianist swinging at first but then cutting loose with fingers blurring above the keys in a wonderful flailing feature. Sadly, a late start to the show meant that I had to leave for the last train home after this volcanic outpouring, but the full session was recorded by BBC Radio 3 for broadcast in early 2010, so hopefully more of the second set will make it over the airwaves to allow me, and you dear reader, to savor this fine trio once again.