By KARL ACKERMANN
January 10, 2018
Sign in to view read count 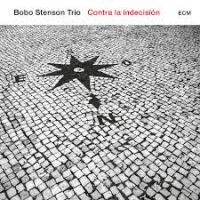 With a few exceptions, Swedish pianist Bobo Stenson has spent his long recording career with the prestigious ECM label, dating back to his oddly named Underwear in 1971. That particular album turned out to be more a showcase for bassist Arild Andersen and drummer Jon Christensen than for Stenson, and the pianist did not lead again on the label for twenty years. Stenson was hardly absent from Manfred Eicher's iconic label in those intervening years, appearing as a sideman for Don Cherry, Jan Garbarek, Tomasz Stanko and Charles Lloyd. On Contra La Indecision, Stenson reconvenes the trio that last issued the 2012 release Indicum.

Stenson and double bassist Anders Jormin have a three-decade history beginning with a mutual association with saxophonist Lenart Åberg. It was the pair's contribution to Lloyd's Notes from Big Sur (ECM, 1992) that brought both to prominence. Percussionist Jon Fält is the youngster in the trio—still in his thirties, he has mostly played with well-known artists inside of Sweden; his initial recording being Indicum.

Jormin is credited with five of the seven original compositions on Contra La Indecision. The album opens with Cuban guitarist Silvio Rodríguez's "Canción Contra La Indecisión" (Song Against Indecision), a light and catchy piece, ironically, from a composer known for his literary seriousness. Erik Satie's familiar "Élégie" begins quietly before Stenson moves it to a bright and punchy treatment with the rhythm section adding subtle, intricate textures. Béla Bartók's "Wedding Song From Poniky" is a beautiful rendition of the jovial original and features a pair of brief, but excellent, solos from Jormin. The bassist's own composition "Three Shades of a House" provides him with more opportunity in the form of an extended intro solo. The piece briefly veers toward abstraction when Jormin picks up the bow, but it doesn't stray far from the overall charm of the melody. "Stilla" has a rambling bluesy quality with an intriguing dialog between Stenson, Jormin and Fält.

Stenson's strong suits have always been his playing—his mastery of the measured build up—and his talent for arraigning other's compositions to put a unique stamp on each. His blending of classical, jazz and folk influences and uncommon time signatures has led to comparisons (not necessarily precise ones) with Keith Jarrett and Brad Mehldau. Stenson's own style is easily recognizable and is especially well-served in the company of Jormin and Fält. Not all of Stenson's work has the bursts of color that we hear in Contra La Indecision and that makes it one of his most interesting albums to date.